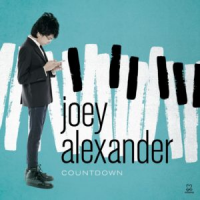 slideshow
After A Summer of U.S. and International Tour Dates, 13-Year-Old Jazz Pianist and Composer Will Headline His Record Release Engagement September 29-October 2 at Dizzy’s Club Coca-Cola in NYC

“A thoughtful musician as well as a natural one, with a sophisticated harmonic palette and a dynamic sensitivity.”—The New York Times

“One of the jazz world’s youngest prodigies is maturing at a breakneck pace.” —Wall Street Journal

After a slate of U.S. and international tour dates in July, August and September—including performances at the Montreal Jazz Festival, Umbria Jazz Festival (in Perugia, Italy), Newport Jazz Festival and the Monterey Jazz Festival—Joey is set to headline his record release engagement at Dizzy’s Club Coca-Cola in NYC September 29-October 2.

Produced by Grammy-winning producer Jason Olaine, who was also at the helm for My Favorite Things – Countdown builds upon the balance of grace and groove, deep soulfulness, rich melodicism and freewheeling improvisational style that made Joey’s first project a critical and popular success.

Essentially a trio project, Countdown reunites Joey with bassist Larry Grenadier and drummer Ulysses Owens, Jr., the rhythm section from My Favorite Things, and includes three tracks featuring bassist Dan Chmielinksi, saxophonist Chris Potter is also featured on Countdown, joining the trio for an extended exploration of Hancock’s “Maiden Voyage.” Joey’s arrangements of well-known pieces by jazz greats make for great invitations into the experience of Countdown. Yet it’s his three originals, “City Lights,” “Sunday Waltz” and “Soul Dreamer,” that are the true emotional heart and soul of the project – re-affirming his remarkable dedication to his craft and showcasing his potential as a contemporary jazz composer.

“Sometimes, when I’m just practicing, playing something else, new melodic and rhythmic ideas come to me and I realize I’m actually starting to compose a song,” the pianist says. “I think writing strong tunes comes from listening to so much music from composers and artists I like. I would say that Monk has had the greatest influence on me. Hearing his pieces so many times had a great impact on me and inspired me to write my own pieces. I actually find it harder to interpret other people’s songs than write my own, because I have to figure out and feel what the song is about and find a way to make it my own.”

In addition to hitting #1 on the Billboard Jazz Albums chart and selling a remarkable 50,000 units, My Favorite Things earned the Bali-born, NYC-based musician Grammy nominations for Best Jazz Instrumental Album and Best Improvised Solo (for “Giant Steps”)—making him the youngest jazz artist ever nominated for a Grammy Award. He is also a 2016 Downbeat Magazine Critics Poll “Rising Star” winner.

Since coming to the United States and releasing his first record, the response to Joey has been nothing short of amazing. He was interviewed by Anderson Cooper on “60 Minutes,” had a feature segment on CNN with Christiane Amanpour, was featured on the front page of the New York Times and on NBC’s “Today Show” with Lester Holt and received a standing ovation at the 2016 Grammys, where he performed after being introduced by Recording Academy President Neil Portnow. Immediately thereafter, his record rose to #1 on the overall Amazon Bestsellers chart, briefly surpassing Adele’s blockbuster 25.

In April, Joey performed with Wayne Shorter and Esperanza Spalding at International Jazz Day at the White House, in front of President Obama, the First Lady and other dignitaries. “I love both creating music in the studio and performing for people onstage,” he says, “but I have to admit there’s something special about getting a crowd excited by playing jazz live. In most situations, I try to be calm, but I love the intense energy that happens between me and the audience. When they express their appreciation in this way, I am inspired to go deeper as a person and musician, improve my craft and create exciting new sounds.”