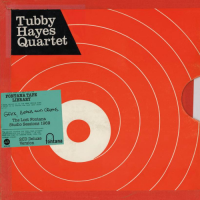 slideshow
Tubby Hayes was busy in 1969. In addition to touring and being recorded on the road, the tenor saxophonist turned out several studio albums and BBC performances. His playing was uniformly excellent across the dates. His live and studio recordings in 1969 were Rumpus with his big band (live at London's Torrington Pub on May 8), The Orchestra (a Fontana studio date on May 28), an appearance as a sideman on a track with the Harry South Big Band (on June 23), 200% Proof with his big band (a BBC broadcast, on July 25), Live 1969, a quartet date (on August 6), a big-band studio session for composer-conductor Laurie Johnson called Synthesis (at Watford Town Hall on August 8), a big band session on the BBC (on August 24), Blue Hayes: the Tempo Anthology (live at Torrington Pub on October 26) and Live 1969 (at London's Hopbine Club on December 23).

Now, a magnificent new two-CD set of previously unissued material has been released by Decca/Universal as Grits, Beans And Greens: The Lost Fontana Studio Session 1969. The newly surfaced session tapes were recorded in London and were presumed to have been lost or wiped clean. Instead, the tapes were discovered when the late jazz writer and Polygram catalogue manager Richard Cook noticed that Hayes’s diary entries referenced the phantom recording sessions. These notations sent Cook into the Polygram archives, where he found the 1969 reels in boxes. Soon after, Cook left Polygram and either was too busy to produce the tapes for release or the album idea was rejected by Polygram due to the cost. Or more than likely, Polygram ran into rights issues with the estates of the musicians. The tapes were re-shelved. Not until 2018 were the Hayes Fontana sessions revisited by Universal.

The two-CD deluxe edition was remastered at London's Gearbox Records Studios, directly from the original source tapes. As a result, the finished sound is spectacularly vivid and natural. The album features multiple takes of individual songs, which to many may seem tedious. Not so with Hayes. Here, all of the tracks are gems. Like tenor saxophonists Stan Getz and Joe Henderson in the 1960s, Hayes was brightly lyrical and bouncy and pure ear candy. There isn't a dull moment on this bountiful set. Recorded in May and June 1969, the set features many glorious moments.

On Where Am I Going? (by Cy Coleman/Carolyn Leigh for Sweet Charity), the three takes in May 1969 feature Hayes with Irish guitar great Louis Stewart (above). Three more versions recorded in June appear here without Stewart. I'm assuming the group re-record the song because the producer wanted an album of consistent players and that Stewart wasn't available on that date. According to Tom Lord's Jazz Discography, Stewart was in Montreux with Clark Terry two days earlier, so that may account for the problem.

Hayes's For Members Only is a barnburner and features an extended solo by pianist Mike Pyne. Duke Pearson's You Know I Care is a mournful ballad on which Hayes shows off enormous soul and versatility. Hayes's Rumpus and the title track are both terrific. Hayes had an engaging, commanding style that told you instantly who was in charge, but his horn was never gruff or tedious. Everything that emerged from the bell of his instrument was colorful, seamless and hued with English optimism.

It's a shame guitarist Stewart wasn't teamed with Hayes on all of these tracks. Both musicians were masters of melody and harmony, and Stewart provided a dynamic counterpart to Hayes's horn, much the way Jim Hall did with Sonny Rollins on The Bridge. They played and recorded together on many recordings in the 1960s. But Stewart's absence is a minor gripe, since the June 1969 tracks without him are perfect in every way. It's just that the ear grows fond of his guitar against Hayes's blowing on the three tracks and misses him a bit on the balance.

By the way, Fontana was founded in 1954 as a subsidiary of Dutch Philips Records. In Britain, Fontana licensed music by major American labels at different points in time and even had a major hit single in the 1966—Winchester Cathedral by The New Vaudeville Band, which won a Grammy.

JazzWax notes: So you know, Grits, Beans & Greens comes in two forms. One is the two-CD version with alternate tracks and breakdown tracks that I focused on today.

The other is a single-CD version with just a single take of each tune, what is likely the album that might have been if released.

The take of Where Am I Going? on the single-CD version is the June 1969 recording and does not feature Stewart on guitar.

Both versions are available as CDs and FLAC downloads from Presto in the U.K. The only version available on vinyl is the one with just a single version of each tune.

JazzWax clips: Here's Take 1 of Where Am I Going? with Louis Stewart. The track features flecks of John Coltrane's Like Sonny...