Tubby Hayes: Back in Town 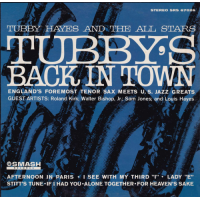 slideshow
While performing in New York in June 1962, British tenor saxophonist Tubby Hayes had an opportunity to record for Smash, Mercury's newly formed jazz subsidiary. Smash was run by Shelby Singleton, a Mercury executive with pop sensibilities. What was remarkable about the resulting album, Tubby's Back in Town, are the musicians selected for the recording session.

The album features Tubby Hayes (ts and vib), James Moody (ts and fl), Rahsaan Roland Kirk (ts, nose-fl, cl, manzellon and stritch), Walter Bishop, Jr. (p), Sam Jones (b) and Louis Hayes (d). Moody was under contract to Argo at the time, so he was listed on the Smash release as “Jimmy Gloomy." Kirk was a Mercury recording artist.

The three tenor saxophonists were deftly melodic but also fierce heat-seekers. The supporting trio is equally superb, particularly Bishop, a stand-out bop pianist with a strong keyboard attack who has slipped under the radar of late.

The tracks are John Lewis's Afternoon in Paris, Kirk's I See With My Third “I," his Lady “E," Sonny Stitt's Stitt's Tune and a medley of three standards—If I Had You, Alone Together and For Heaven's Sake.

On Afternoon in Paris, Hayes plays vibes while the introduction and ending are played by Kirk on tenor sax and manzello simultaneously.

On I See With My Third “I," Moody and Kirk open playiing flutes in unison. Moody takes the first flute chorus, with Hayes playing vibes followed by Kirk's flute chorus.

On Lady “E," Kirk plays the first two notes on manzello and tenor sax simultaneously with Hayes and Moody responding on tenor saxophones. Kirk takes the first tenor solo. Next comes Hayes and then Moody.

On the medley of ballads, each saxophonist is showcased. Moody plays on If I Had You, Hayes follows on Alone Together and Kirk finishes with For Heaven's Sake.

This album marks the first and only time Hayes recorded with Moody and Kirk. Hats off to the genius who conceived the project, brought these musicians together and decided who would play when. The entire package is masterful.