SOURCE: TWO FOR THE SHOW MEDIA
December 1, 2017
Sign in to view read count 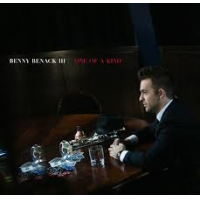 Benny Benack III, a young and multi-talented Pittsburgh native and denizen of the New York jazz scene, is never one to limit himself. He is both an affable and expressive jazz singer and a formidable, modern-minded trumpeter, and these elements of his musical self are deeply and effortlessly intertwined. On One of a Kind, his debut release, Benack also reveals himself to be a wry and expressive songwriter and lyricist, bringing his boundless musical gifts together in a program that’s steeped in tradition but every bit as restlessly individual as his album title suggests.

Benack teams with two players he calls his “musical brothers,” pianist Emmet Cohen and bassist Alex Claffy, as well as a key mentor, drummer Ulysses Owens, Jr. “Ulysses was really the first musician that took me under his wing and gave me a shot and brought me on the road,” Benack says. “To have him here on my first album means the world.” Saxophonist Joel Frahm and guitarist Yotam Silberstein, masters on their respective instruments, make vital contributions as well.

Presenting eight Benack originals (four vocal, four instrumental), one by Emmet Cohen, vibrant covers of Burt Bacharach and Harry Warren/Al Dubin classics, and a closing killer novelty song by Eddie Jefferson, Benack paints a self-portrait in sound, honoring a legacy that stretches back to Benny Benack, Sr., his trumpeter/bandleader grandfather. Having grown up playing gigs with his father Benny, Jr., and absorbing influences from his musical theater vocalist mother Claudia, Benny III became the kind of player, writer and interpreter we hear today on One of a Kind: “I gravitated first to the legends of Tin Pan Alley. I find myself identifying not only with their timeless harmonic and melodic sensibilities, but also the whimsical charms of their musings on romance and melancholy. I would love for my songs to capture the essence of that magical Golden Era.”

Benack continues: “The lyric aspect of my composing didn’t develop until much later. As I became more comfortable with my voice maturing into a focal point, it was only natural that I would gain inspiration to write from my personal experiences. For that to occur I needed a certain amount of romance and heartbreak, along with successes and setbacks. When those came to be, I found the music and words flowing out of me faster than I could write them down.”

The history of singing trumpeters goes back of course to the very foundation of jazz, which is Louis Armstrong. It goes forward to encompass Roy Eldridge, Dizzy Gillespie, Clark Terry, Chet Baker, Kenny Dorham and more. “Anyone who steps onstage and sings while holding a trumpet owes a debt to all of them,” says Benack. “Because the trumpet is such an intimately vocal instrument, I believe it attracts musicians who hold lyricism and humanity in the highest regard. While my singing style is more out of the classic crooner continuum of Sinatra, Tony Bennett and Harry Connick, Jr., I relate the most to people like Dizzy and Louis, who showed the world that virtuosity and artistry didn’t have to be packaged in a demure and ‘serious’ way, that it was perfectly OK to laugh and smile while playing on the highest level.”

That upbeat sentiment is there from the first bars of the robust mid-tempo swing opener and title track “One of a Kind.” It’s a song about youthful love and exuberance, says Benack, and as a vocal-and-trumpet number it’s “the perfect summation of who I am as an artist.” Then after the Jobim-inspired, guitar-driven “Kiss Me Slowly” comes the tightly orchestrated and drum-centric “I Found You,” followed by Cohen’s “You Already Know,” which the pianist wrote with Benack in mind “as a piece that would feature my strengths: fiery excitement, whirring harmony & spirited fun!”

Benack recalls “Looking for Love” as “the first ballad I ever wrote,” while the fiery hard-bop of “Jumpstart” is his “homage to the ‘Young Lion’ movement of the ’90s, when my contemporary trumpet heroes burst onto the scene. I tried to imagine Nicholas Payton or Roy Hargrove slicing through these chord changes, and I hope I did them justice.”

Silberstein returns on acoustic guitar in fine form for the romantic Latin instrumental “When Midnight Comes.” Benack plays flugelhorn, joined by Frahm on soprano, on the Ahmad Jamal-inspired “Londontowne,” while “Guh Guh Guh” (with Frahm on tenor) is a suitably frenetic set-closer featuring the full band. “The title comes from how I hear the song’s first three notes,” says Benack. “The pace builds and builds until the ending explodes like a comet in flight….”

The remarkable arrangements of “Close to You” and “I Only Have Eyes for You” are full of surprises and a fun, grooving vibe that evokes the best of the historical intermingling of jazz and pop. And “Benny’s from Heaven,” which Benack first heard James Moody sing at a jazz camp years ago, was destined to become an irreverent staple in his repertoire. “After Eddie Jefferson’s lyrics, I composed the vocalese myself with my own solo as a framework, trying to channel the powers of such a wordsmith.”

Throughout One of a Kind, on the horn and the mic, Benack brings it all together with stirring swing and a unity of aesthetic intent, in the spirit of his role models. “My ultimate aspiration,” he says, “is to have each side of my artistry complement the other, to give my voice and trumpet space to shine.” And shine they do.