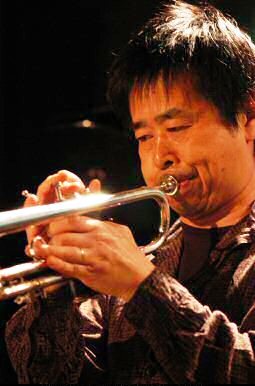 “Tamura develops his solos with smears and slurred phrases that lead up to eruptive outbursts on his horn.... he takes his instrument to precarious heights and to burrowing depths."
-- Frank Rubolino, Cadence

Trumpeter Natsuki Tamura swings from the most hard-edged abstraction to the most touching lyricism on his two latest releases. On Cut the Rope (Libra) with First Meeting -- Tamura, pianist Satoko Fujii, guitarist Kelly Churko, and drummer Tatsuhisa Yamamoto -- Tamura pursues some of the most rigorously abstract free improvisation he's ever recorded. At the opposite end of the musical spectrum, Tamura's acoustic band “Gato Libre" -- with Fujii on accordion, Kazuhiko Tsumura on guitar, and Norikatsu Koreyasu on bass -- creates music of melodic, if surreal beauty on their fourth album Shiro (Libra). There are very few trumpeters capable of inhabiting such widely different musical worlds, but Tamura sounds equally at home in both settings.

Cut the Rope sounds unlike any other album Tamura has made. Conventional melody and structure take a back seat to fragmentation, textural and timbral explorations, and rapid-fire juxtapositions that create kaleidoscopic sound collages. Each track on this completely improvised CD is complex, but purposeful. The improvisations sound complete and organic because the careful listening, expert judgment, and musicianship of the band members shapes the music. The title track, for instance opens with the metallic clangor of cymbals, piercing wails from the trumpet, electric staccato bursts from guitar, and prepared piano. At times it is difficult to tell who is making which sound. The tension builds as the music grows denser and the pace quickens. Then it opens into a quiet spacious area pierced by high ghostly trumpet and rumbling piano chords, before building to a crescendo again. The band makes amazing use of texture and tone color on “Headwaters." Fujii's prepared piano sounds like a warped recording of a gamelon, while Churko scratches and scrapes, and Tamura growls and moans. The piece unexpectedly resolves into a simple, folk-like melody with jazzy guitar chords. On “Flashback," Churko's guitar buzzes and howls like a power saw as Tamura bends red-hot notes into tortured patterns. Drummer Yamamoto seems to be everywhere at once, an inescapable presence in the music racing around his drum kit interjecting rhythm and color. On “Kaleidoscopic," every sound is grist for this band's mill, with references to the blues, art rock, Stockhausen, free jazz, European free improvisation, all swirling and colliding in one of the most surprising and thrilling tracks on an already startling album.

Gato Libre released their first album in 2004, and have been on a long, strange odyssey ever since. Drawing on folk musics from anywhere and everywhere on the globe, the music of Gato Libre sounds almost familiar, yet always remains elusive. Shiro is their most assured and subtle release to date. They are now so comfortable in Tamura's musical parallel world that every track sounds relaxed, organic, and fully realized. They bring out unforeseen nuances and find unexpected areas to explore in each tune. On “Dune and Star" Fujii's accordion offers hushed support for Tamura's solitary contemplations. As Tsumura and Koreyasu strike up a haunting ostinato, Tamura sustains the mood of nocturnal reflection in his solo. “Waterside" opens with a beautifully articulated guitar solo that glows with Tsumura's warm, translucent tone. Koreyasu outlines a stately dance beat, perhaps somewhat Greek in character, reinforced by Fujii and Tamura. On “Mountain, River, Sky," the quartet wrings every bit of emotion from Tamura's simple theme, and manages to maintain that feeling of emotional honesty and directness throughout their improvisations. Bassist Koreyasu's solo is practically spontaneous song. “Falling Star" features a stop-start melody that shapes the improvisations that follow and features an especially lyrical statement from guitarist Tsumura. “Memory of a Journey" is a particularly joyful tune, with the band clapping between phrases of the melody. Tamura spins one of his best solos on the album, playing with sound and line with special verve and sensitivity.

A veteran of groups in both Japan and the United States, including quartets and big bands led by his wife, pianist Satoko Fujii, Tamura is a trumpet virtuoso praised by Derk Richardson in the San Francisco Bay Guardian for “Stylistically spanning a spectrum of musical history that includes trumpeters Clifford Brown, Miles Davis, Lester Bowie, and Toshinori Kondo..." As a leader, he has made 11 albums, including two unaccompanied solo discs, as well as four by Gato Libre, and two by his electric quartet. He and Satoko Fujii have also made several duet albums, and Tamura worked with Fujii and drummer John Hollenbeck in the collective Junk Box trio. “Tamura has worked to develop highly personal sound," writes Jason Bivins in Cadence, “employing various new techniques and tonal resources, including growls, flutters, squirts and split tones... beautiful music, defined by its intelligence and risk."

Tamura's penchant for risk-taking has never been more obvious than on his two widely divergent new releases.