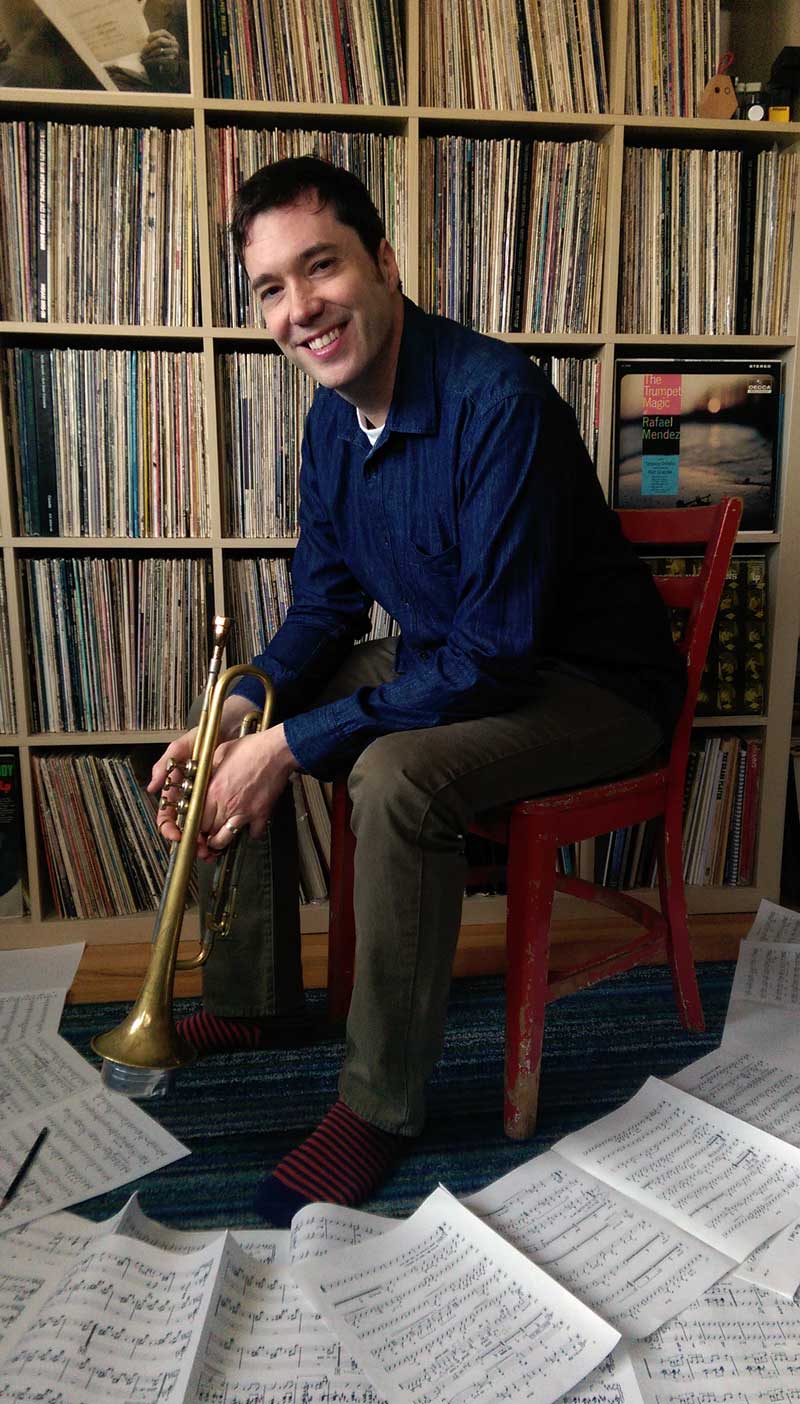 slideshow
“The first thing you need to know about ‘Interview Music,’” says Bay Area trumpeter and composer Ian Carey about his new jazz suite, “is that it’s not about trying to get more interviews.” (Though he’s not averse to the idea, he adds.)

The piece, which will be premiered at the California Jazz Conservatory (formerly the Jazzschool) in Berkeley on Saturday, September 20, at 8:00 pm, is a 45-minute, four-movement adventure and Carey’s longest composition to date. It is a vehicle both for his intricate writing and the improvisational chops of his group, the Ian Carey Quintet+1, last heard on 2013’s acclaimed album Roads & Codes (Kabocha Records), which received praise from DownBeat and NPR, and appeared on many critics’ best of 2013 lists.

The title of “Interview Music” refers to a recent discussion in the jazz world over the increasing percentage of new music being funded through nonprofit commissions and grants, and whether that system favors what the late pianist Mulgrew Miller called “interview music”—high-concept, programmatic works, often with subject matter like visual artists, literary figures, or social movements. “Everyone started to get the feeling,” says Carey, “that they’d never get a second look if their music wasn’t about Pablo Neruda or the grape boycott or the Fibonacci sequence or whatever.”

Carey has turned the tables on the argument by writing a new extended piece for his ensemble which specifically rejects that approach. Somewhat ironically, “Interview Music” is being funded by just such a grant (from the San Francisco Friends of Chamber Music's Musical Grant Program), but Carey noted when applying that he specifically did not want to go into the project with such a pre-existing concept. “Classical composers have created amazing works for centuries with no topics at all, other than the music itself—Symphony or String Quartet number whatever, ‘Octet for Winds,’ and so on,” he says. “I feel like jazz composers think they need to use catchy concepts and topics to stand out, but shouldn’t the catchiest part be the music?”

Carey adds that he never felt comfortable trying to decide what a piece should be about before writing it—paraphrasing Miles Davis’s famous “I’ll play it and tell you what it is later” quip, he says, “I just don’t work that way. I write first and figure out what it’s about after I hear it. If it’s about anything!” Happily, the grant committee agreed, and funded the piece’s composition and premiere performance.

The result is a challenging work which runs the gamut from intricate through-composed sections to raucous group improvisation, showcasing the chops Carey has developed over his past decade of writing for the ensemble. His goals as a composer—providing individually tailored solo contexts for each improviser, utilizing the dense counterpoint favored by his favorite composers, and moving beyond the melody-solos-melody roadmap of more traditional jazz writing—show up in surprising ways, including a passacaglia (a classical form built around a cycling melodic figure) and a movement in which the horns and rhythm section each spend most of the time in completely separate tempos (borrowing a trick from Carey’s idol Charles Ives), but the improvisational talents of the ensemble are never far from the forefront. “As complicated as the writing got, I never wanted to lose sight of the fact that it's a jazz piece,” Carey said. “Improvisation and swing should still be the stars of the show.”

Originally from upstate New York, Ian Carey lived in Folsom, California and Reno before moving to New York City in 1994, where he attended the New School (studying composition with Bill Kirchner, Henry Martin, and Maria Schneider, and improvisation with Reggie Workman, Billy Harper, and Andrew Cyrille). During a productive seven years in New York, he was able to perform with musicians as varied as Ravi Coltrane, Ted Curson, Ali Jackson, Marion Brown, and Eddie Bert, but when an opportunity arose to spend a summer in San Francisco, he realized he was ready for a break from the Gotham grind. He soon met the musicians who would become the core of his quintet, which transformed over the following twelve years and three albums (2005’s Sink/Swim, 2010’s Contextualizin’, and Roads & Codes) into a tightly-knit unit dedicated to tackling Carey’s original compositions. In 2012, looking to augment the group’s sonic palette, he expanded the group to six members.

The Quintet+1—which, in addition to the leader's trumpet, features Adam Shulman on piano, Kasey Knudsen on alto saxophone, Sheldon Brown on bass clarinet, Fred Randolph on bass, and Jon Arkin on drums, each an accomplished artist in his or her own right—may have their work cut out for them in preparing “Interview Music,” but Carey doesn’t doubt they’ll bring their “A” games: “These guys are the real deal. There’s no one I’d rather ask to bring this thing to life.”