Immediately recognizable, yet brand new in every way, this soon-to-be jazz classic is not to be missed. 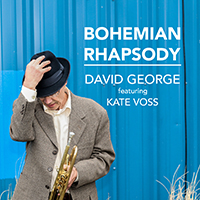 slideshow
Trumpeter David George has released a fresh jazz interpretation of “Bohemian Rhapsody" unlike anything you've heard before.

The track features David George on trumpet in an intimate conversation with Earshot Magazine’s Vocalist of the Year nominee, Kate Voss, intertwining George’s improvisational prowess with Voss’s stunning vocals. Every nuance of George’s fresh interpretation of Bohemian Rhapsody is expertly executed by a group of talented musicians, featuring Jerry Garcia on drums, Tor Deitrichson on percussion, Oleg Ruvinov on electric bass, John Tobin on piano, and Jason Goessl on guitar.

Immediately recognizable, yet brand new in every way, this soon-to-be jazz classic is not to be missed. Released by Seattle- based production company Arena Jazz, it is available for download through your favorite digital outlets, including iTunes and Amazon. Media representatives may contact Yakup Trana for a promotional/reviewing download and media press kit.

David George is a Seattle native who has held a trumpet in his hands every day since Elementary School. David has performed on radio and television broadcasts, on cruise ships, in jazz cellars, in theaters and concert halls from Seattle to Tokyo and throughout Europe as part of big bands, jazz combos, salsa groups, and orchestras. He has had the honor of playing for dignitaries in Madrid, opening the International Motor Show in Seoul, Korea, and was a featured artist in the week long Mardi Gras celebration in the Canary Islands. www.davidgeorgemusic.com

Arena Jazz is a division of Arena Music Promotion (AMP), a music production and promotion company headquartered in Seattle, Washington.