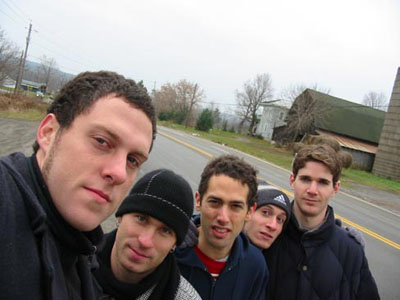 The Music Band is: Shane EndsleyTrumpet and provider of paper containing circles and lines, i.e. compositions

Shane Endsley on his new project: “The Music Band is a long overdue step for me. This group is set to create my second recording as a leader, the previous one being ten years old now. As the band name might suggest, this project will be an exercise in simplicity. It's a new group and the plan is to bring in some material that doesn't require too much head scratching from the players but rather, sets us comfortably off into some lyrical improvising. I want us to get the tunes going and then be able to come off the page, to not be laden with intense structure. Having said that, I should probably say that the music will not be banal or mundane. It will just be designed to be easily digestible so that we can all enjoy the unrestricted artistry of young masters like Craig, Matt, and Ted."

“Jazz keeps slowly widening, and the young trumpeter Shane Endsley is working calmly and effectively at the perimeter." - The New York Times

Shane Endsley resides in Brooklyn, NY, where he is steadily building his reputation as one of the most unique voices on the trumpet today. DownBeat Magazine named him as one of the “Top 25" trumpeters of his generation in 2007. A truly modern and dynamic musician, he can be found on recordings ranging from modern instrumentalists Steve Coleman, Dave Binney, and Donny McCaslin, to folk and rock icons like Ani DiFranco, Erin McKeown, and Pearl Jam. Shane is an accomplished drummer and composer who is constantly expanding his musical vocabulary with the rich experiences offered by New York City. He dove into the intricate ornamental style of the Balkan brass bands with the powerhouse 10 piece group, Slavic Soul Party and is now venturing into the lilting rhythms of Brazilian Forro and Maracatu with Scott Kettner of Nation Beat and Maracatu NY. Endsley is a founding member of the band Kneebody, recently nominated for BEST JAZZ GROUP in the 2010 DOWNBEAT READERS POLL.

“Kneebody flies above the label zone, crafting instrumental, postmodern music that jukes convention and genre. If the group's intricate compositions had to be filed away in a record bin, chances are they would rest in the jazz corner, but the Los Angeles/NYC quintet touches on post-rock, classical, and avant-garde forms as often as they flirt with swing. Last year's Low Electrical Worker found the band stretching out in odd meters with equally odd instruments, getting loud, having a blast--and maybe even reinventing music a little in the process"--The Onion