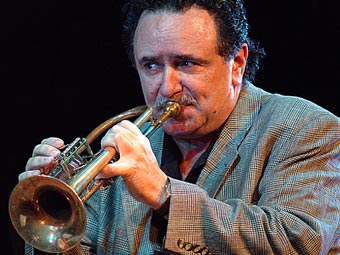 slideshow
In a unique two-day venture, trumpet/flugelhorn player Claudio Roditi has created Brazilliance x 4, a stunning tribute album to the land he loves, celebrating with colleagues that he’s known and worked with for many years, all of them fellow Brazilians. “How this came about,” Roditi states, “was we had a performance at [Resonance Records owner] George Klabin’s recording studio in Beverly Hills. We played a live concert, which was recorded. The next day we had the opportunity to record again, this time without the public, of course.” The “we” that Roditi refers to includes dynamic band members Helio Alves on piano, bassist Leonardo Cioglia and drummer Duduka Da Fonseca.

Brazilliance x 4's set list of mostly bossa novas and sambas served as a primer for the recording the following day. For that session, “We played most of the songs that we played the day before,” he recalls. “We had the option to use material from the concert since it was recorded. But there were things that I felt were too long, or where we thought there were mistakes, we re- recorded them.” For listeners, it might be initially surprising to all of a sudden hear clapping toward the end of the program. “That’s because,” Roditi clarifies, “we used ‘Gemini Man’ and ‘Tema Para Duduka’ from the live date. I thought the length and the playing and the excitement were just right.” It’s not surprising that those two Roditi cuts are among the album’s highlights.

Putting the album together, Roditi was insistent on the placement of tunes. “I chose the order of the songs, to make things flow,” he notes. “Sometimes musicians leave the best songs for the end of the album. I like to put the best stuff first. Someone who sits nowadays for an hour is rare. The right order of the songs is a must for an album.” That’s not to say that Roditi isn’t proud of the whole album. After all, he decided to save those two exciting live cuts for the third-to-last and last songs to be heard. A major part was also played by Klabin; who produced, mixed and recorded Brazilliance x 4.

As for his choice of personnel and the repertoire, Roditi beams when he says, “These musicians and the composers of many of the songs are friends of mine. I know them all personally and have played with most of them. Drummer Duduka da Fonseca and pianist Helio Alves—who have a project in which I am participating with Eddie Gomez—were part of my band. Consequently, I chose them for this date.” Roughly half of the songs were written by Brazilian composers; with Roditi contributing four of his own. There is also one cover, Miles Davis’ “Tune Up,” which is given a new tune-up thanks to a lively new bossa nova arrangement, not to mention Roditi on an expressive flugelhorn solo.

“I enjoy this band of Brazilians—there is a direct link to the music.” Roditi seems particularly proud of the inclusion of Johnny Alf’s “Rapaz de Bem.” “He wrote it around 1953,” Roditi states, “and it was way ahead of its time. It’s got a bossa nova sound that didn’t show up until about seven years later. And ‘Quem Diz Que Sabe’ was written by one of the my very favorite composers, João Donato.”

Roditi was born May 28, 1946, in Rio de Janeiro, where his musical studies began at age five. Exposure to jazz—particularly recordings from his American uncle’s collection by Louis Armstrong, Harry James, Dizzy Gillespie and Miles Davis, among others—inspired the teenaged Roditi to look beyond his own Brazilian roots. A finalist in the International Jazz Competition in Vienna at 20, Roditi later moved to Boston, where he studied at the Berklee School of Music in 1970–’71. He eventually joined the faculty of the School of Contemporary Music and started in with club and concert performances.

By 1976, Roditi was in New York, where he went on to perform and record with McCoy Tyner, Tito Puente, Joe Henderson, Herbie Mann, Tito Puente, Paquito D'Rivera and Charlie Rouse, among others. And in 1989, Roditi became a member of Dizzy Gillespie’s United Nation Orchestra and toured with The Jazz Masters, a Gillespie tribute group let by Slide Hampton. In 1995, he earned a Grammy nomination for his work on Symphonic Bossa Nova with Ettore Stratta and the Royal Philharmonic. As for his playing, liner notician/musical collaborator Bill Kirchner said it best when describing Roditi’s approach to the trumpet: “He is an original who has combined the Clifford Brown/Lee Morgan idiom with the lyricism of Chet Baker and the magnificent melodies and rhythms of his native Brazil.”

“I’m very proud of this project,” Roditi says. “There is nothing elaborate here, but it’s highly pleasant. I think we achieved our goal. There is always something about Brazilian music and jazz,” Claudio Roditi concludes. “The combination of the two is so dear to my heart. I love it. The tune ‘Song for Nana’ and the album are dedicated to the singer Nana Caymmi. I very much love her singing.”