Trombonist Vincent Gardner at the Hilton Harrisburg & Towers on February 22

SOURCE: ALL ABOUT JAZZ PUBLICITY
January 26, 2009
Sign in to view read count 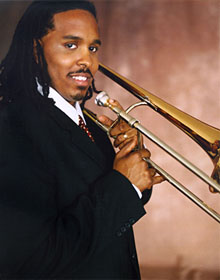 CPFJ has always taken great pride in bringing top musicians on their instruments to our area. Trombone players are no exception. Masters like the eminent J.J. Johnson, “Papo” Vazquez, Conrad Herwig, Steve Davis, Steve Turre, Ray Anderson, Jeff Ashby, Robin Eubanks and Al Grey – a “Who’s Who of the Trombone” – all have graced our stage.

Now we add Lincoln Center’s Vincent Gardner to the list. He was born in Chicago in 1972 and raised in Virginia. His family had a strong musical background, including his mother, his brother, and his father, Burgess Gardner, a trumpeter and music educator who has been very active on the Chicago music scene since the 1960s. Singing in church from an early age, he began playing piano when he was six, and soon switched to the violin, saxophone, and French horn before finally deciding on the trombone at age 12.

Mr. Gardner became interested in jazz while attending high school and upon graduating went on to Florida A&M University in Tallahassee, Florida and the University of North Florida in Jacksonville. In college, he took a summer job performing with a jazz band at Walt Disney World in Orlando, Florida, where he caught the ear of Mercer Ellington, who hired him for his first professional job. After graduating in 1996, he moved to New York to pursue his professional career.

In 2000 he became a member of the Jazz at Lincoln Center Orchestra, led by Wynton Marsalis. Of his role, Vincent says “You can’t think about it. You just go to make music. And it’s so fun … The band is just so great, and we have so much fun and play so much different music. It stays fresh all the time. So you don’t think about it. You’re just happy to be playing.”

“In the big band era, most players were great readers that could play in a jazz style with jazz phrasing, and then there was a featured soloist,” he said. “But with us, everybody in the band can play.”

“Wynton always says the hardest part of his job is making sure that everybody plays a solo every night, trying to make sure that all 15 guys in the band get to play.”

Despite all that talent, egos don’t clash. In fact, any two members of the band can get along at just about any time. Gardner said he and the band’s oldest member, baritone sax player Joe Temperley, 80 years old and a native of Scotland, are buds. It’s a good stroke of fortune in a band this size.

“I’m sure Wynton selects someone (for the band) more on their musicality than their personality. It just so happens that everybody’s cool.”

Vincent made an impressive debut as a leader in his own right with “Elbow Room” on Steeplechase Records (2006).

With Vincent on this date are some of NYC’s finest musicians.

Walter Blanding (tenor and soprano saxophones, clarinet) is a fellow JLCO member. Among his many experiences with the likes of Cab Calloway, Wynton Marsalis Septet, Marcus Roberts and Illinois Jacquet, he was also “Jazz’s Ambassador to Israel” according to Newsweek. He had a major impact on the music scene there with 4 years of touring and teaching.

Ali Jackson (drums) also currently performs with the Jazz at Lincoln Center Orchestra. He was featured on the Wynton Marsalis Quartet’s “Magic Hour” (Blue Note). In addition he has performed with Aretha Franklin, Diana Krall, George Benson and many others.

Greg Williams (bass) is likewise an always “on call” sideman.

Tickets for the February 22, 2009 concert are: General Admission - $25, General Student Admission - $12, CPFJ Adult Members - $18 and CPFJ Student Members - $10. CPFJ School Member student with ID - $5, and children under 12 are always free. CPFJ Sponsors and Corporate Members receive their tickets in the US mail. Tickets also may be purchased by phoning 717-540-1010 or at the door on the day of the concert. Our website cpfj.org offers a wealth of information, including the option to purchase your tickets online.