SOURCE: ALL ABOUT JAZZ PUBLICITY
November 12, 2007
Sign in to view read count 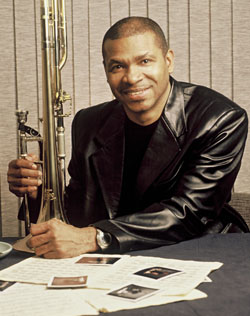 slideshow
Robin Eubanks is only one member of a notoriously musical Philadelphia family--you're probably familiar with some of his brothers--and was playing trombone at a tender age. He moved to New York City after graduating from the Philly-based University of the Arts, has collaborated with an enormous range of musicians and was a prominent participant in the 1980s M-Base movement most associated with Greg Osby and Steve Coleman.

If you attend jazz concerts with any regularity, you've almost certainly gone to see the Dave Holland Quintet; the bassist's group is one of the top draws in instrumental music, and it's hard to imagine the band without Eubanks--his thrilling trombone solo cadenzas and contrapuntal interplay with saxman Chris Potter seem integral to the Holland group, as are his tricky, time-shifting, sectional compositions. Eubanks is the sole Quintet member to also perform in Holland's Octet, Big Band and new Sextet.

Eubanks has been releasing records under his own name since his 1988, but Eubanks' Live, Vol. 1 (Kindred Rhythm, 2007) is his best one yet. It's a DVD/CD package by his trio EB3 of drummer Kenwood Dennard and keys player Orrin Evans; obviously, it's a live recording. EB3's a small band, but its sound is startlingly large--with Dennard and Evans doubling on keyboard bass and Eubanks playing both acoustic and heavily effected, looped electric trombone (as well as electronic percussion), this group's sound is much greater than its number of members would indicate.

AAJ Contributing Editor Paul Olson spoke with the hard-touring trombonist (with a Holland group or EB3, he's probably headed to your town) about EB3, the new CD/DVD, the joys of electric trombone, and much more.