Trombonist Chris Abelen Releases "A Day At The Office"

The proof’s in the final report. The players don’t sound like they’re watching the clock, waiting for work to be over. They sound psyched, rested and ready. Putting this music together, Chris Abelen struck a blow for worker comfort, efficiency, and effective time management. --Kevin Whitehead 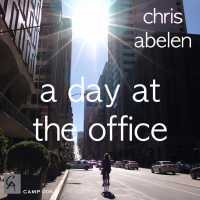 slideshow
Trombonist Chris Abelen doesn’t think (or talk) like other composer bandleaders—the kind who work to further their careers. He lives just outside Amsterdam, and is plugged into the scene there, but he isn’t one for hanging in the Bimhuis café till all hours, or mounting bands to play international summer festivals. He has a disarming habit of describing his process as chaotic, or plain nuts: When I put this bassist and drummer together, each wrongly assumed the other would keep time. Or he’d tell you how uncomfortable someone was playing in his band. When he put out the archival live recording Proost, he was careful to mention how little the original audience had cared for it. For example.

And yet the music always comes out right. That musician who felt uncomfortable sounded great in his band, and Proost is one of the overlooked modern Dutch gems.