Trombonist And Vocalist Hailey Brinnel Brings New Life To Hidden Gems Of The Heyday Of The Swing Era With Her Debut Album, 'I'm Forever Blowing Bubbles' 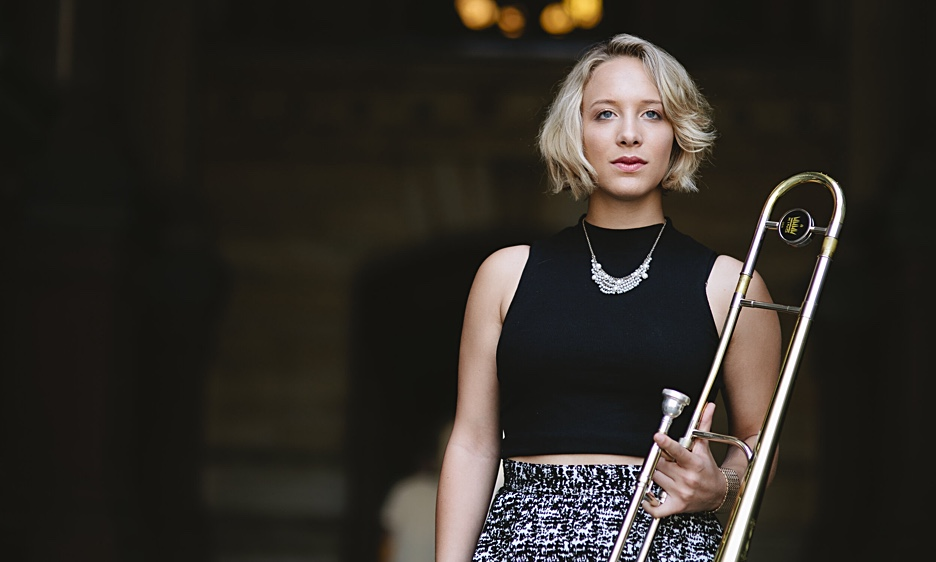 SOURCE: OUTSIDE IN MUSIC
February 7, 2021
Sign in to view read count

What beautiful music! Hailey has the voice of an angel! Her sound is so pure and soulful. It’s great to hear a vocalist that sings on a very high and plays trombone on an equally high level. This band is SWINGING... I can’t stop listening! —Terell Stafford 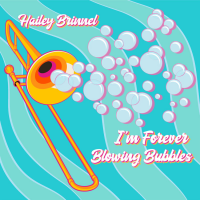 Described as “a versatile talent on so many levels of expression” with “amazing control and grace” by legendary saxophonist Dick Oatts, and as writing “inspired arrangements” that “serve as the perfect channel to highlight her extraordinary talent, with a seamless reverence for tradition and unique, fresh style that keeps the music swinging” by DIVA Jazz Orchestra Director Dr. Sherrie Maricle, Hailey Brinnel is a trombonist, vocalist, and arranger set apart from the rest. Brinnel’s debut album, I’m Forever Blowing Bubbles, showcases her vast skillset while paying homage to the spirit of the Swing Era and Early Jazz with ingenious arrangements of both widely- and lesser-known standards.

The sounds of the Swing Era bring more than just the joyous energy of up-tempo jumps or the passion of crooners to 2021 Sarah Vaughn International Jazz Vocal Competition Finalist Hailey Brinnel. For her, the Swing Era and its predecessors sound like warm nostalgia of childhood and the comfort of home. Brinnel was born into a family of musicians: her father is a pianist and vocalist, her brother a pianist and saxophonist, her grandmother and grandfather a tap-dancer/vocalist and trombonist respectively, and her Zayde (Yiddish for “grandfather”) was an accomplished saxophonist. It was in this environment of perpetual music that her love for the art of jazz was cultivated, and her knowledge of Swing music grew. I’m Forever Blowing Bubbles is a natural outpouring of this environment and the plethora of fond memories and melodies of the home. Memories and music are powerfully linked, and Brinnel’s album plays into this beautiful connection by featuring standards—popular and vastly forgotten—whose tradition and themes harken to a time and lineage of days gone by. “I want my audience to be able to feel the same sense of joy and warmth that I do when I hear this particular collection of songs,” Brinnel says.

I’m Forever Blowing Bubbles is both the title of the album and one of its tracks. One of her Zayde’s favorite songs, this song holds a deeply personal meaning for Brinnel, as well as a deeper meaning beyond the upfront happiness of the title. Juxtaposed to the title’s child-like optimism are tinges of sadness and disappointment hidden throughout the song with lyrics such as “like my dreams, they fade and die,” and “fortune’s always hiding.” These change the meaning from simple gaiety to subtle contemplation of and reconciliation with the negativity and adversity in one’s life, while still finding and rejoicing in moments of happiness to sustain oneself. “Especially now,” Brinnel states, “this message resonates more with me (and many others) than ever, and I felt that it was an apt title for releasing this project in the COVID era.”

I’m Forever Blowing Bubbles stands distinct from its contemporaries musically. Where much of today’s new jazz releases focus on modern melodies and influences, Brinnel’s debut is rooted firmly in the original intentions of 1920s-1940s jazz, arranged such that the energy is preserved but new life is undoubtedly breathed into them. Acclaimed trumpeter Terell Stafford praises Brinnel for “honoring the history of this music” and sounding “so pure and soulful” that “I can’t stop listening!” Brinnel’s music does not seek to water down that of her forerunners to make it appeal to current generations; rather she presents this music in such a way that amplifies their characteristics and integrity, fully relying on that infectious spirit that made jazz popular to begin with. “As a horn-player and a singer,” Brinnel tells, “I try to utilize the story-telling and lyrical elements of vocal jazz while also employing techniques from my instrumental background, such as big-band-style shout sections and group improvisation of New Orleans traditional jazz.”

In 2016, Brinnel’s Zayde passed away. He was an important figure in her life, and his passing was felt deeply. The day after Brinnel heard the news, she sat at the piano in her South Philadelphia apartment and, in a single session, wrote an arrangement of I’m Forever Blowing Bubbles, a song she intrinsically linked with him. The mixing of nostalgic memories with the sorrow of the moment is reflected in both the lyrics and arrangement of the tune, which she wrote in a “sort of… stream of consciousness, moving from a more traditional classical waltz to a piano trio, then traditional New Orleans jazz, bass solo, and finishing with a down-tempo jazz waltz.” Orange Colored Sky is another song tied to memory for Brinnel. “I remember my Gram singing [it] while my dad accompanied her on piano,” she recalls. Brinnel’s arrangement draws on her background as a big band player, featuring a shout section with drum trading that – despite the smaller ensemble size – astutely captures the enthusiasm and vigor of jazz's large ensemble tradition. A more well-known standard, Cole Porter’s iconic Easy To Love appears alongside those featured on this album. Where traditionally this song is performed as a ballad, Brinnel’s arrangement begins with a vivacity that unequivocally signals a departure from this norm. “I wanted to convey a more exciting “love-story", and allow my audience to share the pure joy that I feel while trading solos with Philadelphia trumpet player Andrew Carson,” Brinnel says. “[Carson] compliments my vocal language while simultaneously pushing the arrangement into an even more exciting territory.”

When asked what she loves about the musicians on I’m Forever Blowing Bubbles, Brinnel expresses appreciation for the individualism they bring to the music. Much of the music featured on this album was brought to life for the first time at their monthly jam session residency at Sherrie Maricle’s venue, and it was the way the band interpreted these tunes that led Brinnel to start writing for each player’s specific abilities and musical personalities. Of bassist Joe Plowman, Brinnel boasts, “His sound is broad yet bouncy and gives energy to the group while keeping time grounded,” and that he “is the strong foundation that every swing tune needs.” Drummer Dan Monaghan’s artistry is captured in that “every note that he plays is purposeful and serves the music in the best possible way,” and pianist Silas Irvine Brinnel describes as “one of the most consistently swinging piano players I've ever heard.” Guitarist Dariel Peniazek is “wonderful at highlighting [Brinnel’s] strengths as a vocalist while pushing the music into new and interesting places.” Clarinetist Sam Bishoff’s artful and authentic playing “perfectly serves the group improvisation of New Orleans traditional jazz” according to Brinnel, and trumpeter Andrew Carson she describes as having “all of the be-bop language in the world coupled with a fiery intensity behind every note.” Steeped in tradition and framed with ingenuity, Hailey Brinnel’s I’m Forever Blowing Bubbles is a boldly original presentation that remains joyously true-to-self. Armed with emotional integrity and a generous helping of skill, Brinnel has written herself an entrance into the assembly of greats, and with all ears hanging on her every syllable, she delivers a musical oration whose richness cannot help but elicit a distinguished ovation.

I’m Forever Blowing Bubbles releases on NextLevel, an imprint of Outside in Music, on March 5th, 2021.

Hailey Brinnel is a trombonist, vocalist, and educator who currently resides in Philadelphia. Touring from age 12 with her father Dave Brinnel, Hailey has established herself as a voice to be reckoned with, playing with noteworthy names including Sherrie Maricle and the DIVA Jazz Orchestra, Ingrid Jensen, Anat Cohen, Pell, and Charles Neville. A graduate of Temple University, she was mentored by Terell Stafford, under whose direction she played with jazz icons including Jimmy Heath, Jon Faddis, Wycliffe Gordon, Dick Oatts, and Ann Hampton Callaway, amongst others. Touring widely, Brinnel has played venues such as Dizzy’s Club Coca-Cola, The Kennedy Center, The Kimmel Center, and The North Sea Jazz Festival and many more. Brinnel is currently a faculty member of The University of the Arts in Philadelphia, and works as a guest clinician throughout the city. Hailey was recently named a 2021 Sarah Vaughn International Jazz Vocal Competition Finalist.

“What beautiful music! Hailey has the voice of an angel! Her sound is so pure and soulful. It’s great to hear a vocalist that sings on a very high and plays trombone on an equally high level. This band is SWINGING... Hailey, thank you for bringing such great musicians together, honoring the history of this music and best of all, sounding so incredible. I can’t stop listening!” —Terell Stafford, Jazz Trumpeter

“Hailey Brinnel is such a versatile talent on so many levels of expression. She truly can swing, arrange, sing, phrase, plays trombone and she has put together a fantastic quintet for her debut recording on Nick Finzer's new label Outside in Music. Hailey has a wonderful voice with amazing control and grace but her singing really digs into the time like a trombone player—and that's because she really is a great one. Hailey has a bright future not only because of her obvious talent but because she was born to swing, sing, and play that trombone!!" —Dick Oatts, Jazz Saxophonist

“Hailey Brinnel is a new & exciting voice in Jazz. As both a trombonist and vocalist, her inspired arrangements serve as the perfect channel to highlight her extraordinary talent, with a seamless reverence for tradition and unique, fresh style that keeps the music swinging.” —Sherrie Maricle, Music Director, The DIVA Jazz Orchestra