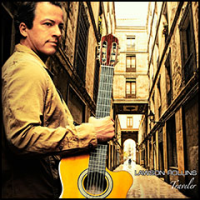 San Francisco, CA: The guitar-guided world music excursions that you hear this month in Barnes & Noble stores throughout the United States come from the recently released Traveler, the critically-hailed fifth album from globetrotting guitarist Lawson Rollins. Debuting upon release in the Top 20 of the iTunes world music chart, the disc produced by Rollins and platinum-selling producer-engineer Dominic Camardella consists of a dozen meticulously performed, multicultural amalgams composed by Rollins inspired by his wanderlust for global gallivanting. The session’s second single, “Berlin Bossa,” dances onto Billboard’s most added chart this week, its first official week at radio.

Traveler plays like leafing through Rollins’s personal journal entries penned during his travels through Spain (“Barcelona Express” and “Meeting in Madrid”), France (“Café Paris”), Germany (“Berlin Bossa”) and the United Kingdom (“Across the Moors”) leading to his stateside return (“Journey Home”) where he discovers the mystique of Louisiana (“Beyond the Bayou”) before embarking west to settle in California (“Marching West”). The record concludes with an elaborate triptych, “The Urban Trilogy,” comprised of a sprawling fusion of cosmopolitan nuances (“Metropolis”), remnants of the Old World (“Ancient City”) and an exhilarating glimpse into the future (“City Electric”). The high-caliber musicians who joined Rollins in getting their passports stamped during the “Traveler” sessions include Grammy-winning violinists Mads Tolling and Charlie Bisharat, Randy Tico (bass), Dave Bryant (drums & percussion) and Cameron Stone (cello). On select tracks they were joined by a horn section along with contributions from Big Bad Voodoo Daddy members Scotty Morris, Joshua Levy and Karl Hunter.

In addition to generating enthusiastic reviews for Traveler and growing national radio spins, including airplay for the musician’s audacious entry into the EDM world entitled “City Electric,” Rollins will be featured in the June issue of Guitar Player magazine. He’s an award-winning independent artist who consistently sets the bar high with his exquisitely-rendered, expansive explorations distinguished by stunningly prodigious guitar play - fast and furious fretwork, can’t miss precision, gorgeous, soul-stirring and richly melodic motifs, riffs and runs. Videos showcasing his astonishing technical abilities have generated close to eight million YouTube views, a rare feat for an instrumentalist. Rollins is a Billboard chart-topper whose exotic sounds seduce both the world music and contemporary jazz charts.

Below are excerpts from some of the album reviews

“Traveler is truly an artist’s best rendering of the history, culture, and memories of complete immersion into other worlds. But then Rollins, an award-winning songwriter and consistent Billboard charter on his previous releases, is used to stirring the Melting Pot in delicious, timeless, original compositions that harken ancient origins with new-found discovery. Somehow, he’s able to capture the very soul of a people from another place while rolling the particular rhythms and beats of indigenous instrumentation and technique with a multicultural enhancement — as if born to the role.” —AXS

“The instrumental tunes represent a romp through world jazz, flamenco, lounge, improvisation, and even Latin America. The fiery guitar stylings, edgy percussion, flashy horns, punchy piano, and lively strings… reveals a varied array of influences that are never dull or unimaginative. Lawson takes listeners on musical journeys that are fun-filled and authentic.” —Inside World Music

“Big on sound, big on worldliness, big on conceptual structure, and big on appeal... The imagery is spectacular, but it’s only part of the picture as you listen to the trademark fluidity of Rollins’ playing, particularly in that Latin vein, which he manages to incorporate in most of the tracks, making for a very original approach to the music you experience here. He clearly ‘gets it’ when it comes to grasping the substance of the various cultures and their individual and magical attraction.” —The Smooth Jazz Ride

“A new visit from the super tasty acoustic guitarist is always an event. Playing with the passion and energy that makes his visits special, here we find him visiting points around the globe with a wildly varied crew that only adds to the set's depth…he's a superstar with as many YouTube hits as those in the star maker machinery. Proof there's great adult listening out there, you really have to take the journey with this traveler. Acoustic music doesn't get any hotter than this.” —Midwest Record

“Acoustic guitarist Lawson Rollins uses flamenco as the basis for his music and technique, but he’s also always had an inclusive ear that leads to pastiches of Latin and jazz, pop and new age, as well as a variety of Mediterranean traditions.” —iTunes

“The expansive arc of the album reaches from the traditions of the Old World to the pulse of the modern metropolis with a boldly diverse, genre defying mix (of) melody, rhythm and improvisation.” —JazzUSA

”This American artist is one of the world's most creative & fusion guitarists in the world.” —Keys & Chords