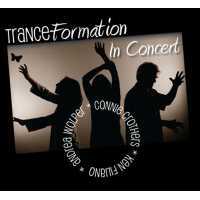 slideshow
TranceFormation, the improvising trio of Connie Crothers (piano), Ken Filiano (bass), and Andrea Wolper (voice), subverts expectation on several counts. From the first moment, this seemingly traditional bass-vocal-piano formation leaves tradition behind: there are no assumed or assigned roles, no leader, no side players. Instead, three strongly individual “voices" join to make music cooperatively as they weave in, out, and among one another, extending, bending, and experimenting with the sonic capabilities of their respective instruments. The music and words are entirely improvised, and anything is allowed to emerge. This CD captures the group’s spontaneously-created compositions performed at The Stone (Manhattan) and Korzo (Brooklyn) in New York City.

Collectively the three players, all of whom are leaders and participants in a wide variety of musical projects, have backgrounds in jazz improvisation, classical performance, blues, theater, avant-garde, and other kinds of music. When they join together in this trio, none of these influences is rejected. The result is music that is surprisingly accessible, as it moves from densely layered to soulful, energetic to reflective, heartfelt to humorous, and even to what Elzy Kolb describes in her liner notes as “hip fairy tales.”

TranceFormation welcomes the inherent mystery of the music making process: the altered, trance-like state that is the source of free and uninhibited expression; deep listening; curiosity; the depth of trust—in the self, in one another, in the music—that allows them to be in the musical moment with ears and hearts wide open.

Connie Crothers, improvising pianist, has been recognized by critics for her originality, virtuosity, and range of musical expression. “A lioness on the keyboard” (Jean Quist) and “a stunning pianist” (Stuart Broomer) who has “forged a truly individual path in music” (Francis Lo Kee), she was included in Cadence magazine's centennial issue list of the most important and influential musicians in the last twenty-five years of the 20th century. Connie has performed solo and with various groups (including her quartet with Richard Tabnik, Ken Filiano, and Roger Mancuso) in concerts and festivals around the world. Her discography includes the duo with Max Roach, “Swish” (New Artists); “Spontaneous Suites” (RogueArt), a four-CD box set of duos with David Arner; and numerous solo and collaborative recordings including several Connie Crothers Quartet offerings. Nine of her CDs have been chosen by critics for their lists of the best records of the year. Connie is the founder and president of New Artists Records. She teaches improvisation.

Ken Filiano performs throughout the world, playing and recording with leading artists in jazz, spontaneous improvisation, classical, world/ethnic, and interdisciplinary performance, fusing the rich traditions of the double bass with his own seemingly limitless inventiveness. Critics have called him a “creative virtuoso," a “master of technique" ... “a paradigm of that type of artist ... who can play anything in any context and make it work, simply because he puts the music first and leaves peripheral considerations behind." An integral member of numerous ensembles, Ken also composes for his own quartet, Quantum Entanglements, (with Michael Attias, Michael T.A. Thompson, and Tony Malaby). His extensive discography includes the solo bass CD, “subvenire” (NineWinds) and his Quantum Entanglements CD, “Dreams From a Clown Car” (Clean Feed). Ken teaches bass and improvisation at his Brooklyn studio, and is on the teaching roster at The New School in New York City.

Andrea Wolper has been described as a singer with “an inventive, thrilling, appealing musical vision" (Blogcritics) who “brings songs to life, whatever their source, working in a milieu that begins with jazz and reaches out to embrace an expressive area that is uniquely her own" (International Review of Music). Mixing genres, crossing boundaries, Andrea approaches all her music with an adventurous improviser's spirit. Her quintet CD, “Parallel Lives" (Jazzed Media) received stellar reviews upon its release in late 2011, and was included in three end-of-year critics' lists; her 2005 release, “The Small Hours" (VarisOne.Jazz), also earned high critical praise. Andrea leads her own group, appearing in her New York home base and touring nationally and internationally; is a member of an original music big band; and has appeared as a guest artist with numerous other jazz and improvising ensembles. She teaches vocal technique, and leads workshops for vocalists and for all musicians on using improvisation as a tool for releasing music with spontaneity and freedom. She is a former president of International Women in Jazz and was on the Advisory Board of the Jazz Vocal Coalition.