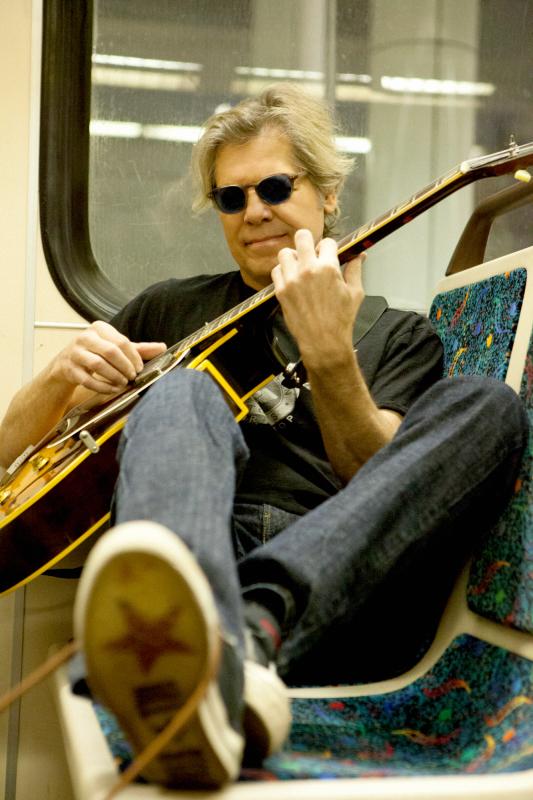 Port Washington, NY: It’s been a helluva two years since guitarist Jeff Golub released his last album, “Three Kings,” which paid tribute to blues legends B.B., Freddie & Albert King. As the record was released, the optic nerves in Golub’s eyes inexplicably collapsed leaving him blind. Adjusting to his new life meant adopting Luke, a guide dog. While attempting to catch a New York City subway last September, Golub fell onto the tracks as a train rapidly approached. He was clipped and dragged by the train as Luke and bystanders frantically attempted to help. Miraculously Golub escaped the harrowing and what could have been a fatal ordeal with only minor scrapes and bruises. Undaunted and as boisterous as ever, Golub stands defiantly, toting his guitar with Luke perched at his feet, at the crossroads of train tracks on the cover of his aptly titled new album, “Train Keeps A Rolling,” which will be released August 13th by Entertainment One Music.

Golub’s 12th solo album had to be something special and have a lot of soul. At the suggestion of his manager, Bud Harner, he teamed with British keyboard great Brian Auger for a rollicking 11-song collection of soul, jazz, blues and rock combining Golub’s raw bluesy guitar licks with Auger’s hallmark Hammond B-3 organ. Golub produced the set with Harner, a Grammy-nominated producer who shared production duties with Golub on the guitarist’s five most recent records. Anchoring the grooves were steady-as-a-rock drummer Steve Ferrone, who was an original member of the acclaimed jazz-rock ensemble Brian Auger, and bassist Derek Frank, who also had a history playing with Auger. Augmenting the tracks were percussionist Luis Conte and a lively horn section comprised of Mindi Abair (alto sax), Nick Lane (trombone), Dave Woodford (baritone sax, flute) and Steve Madaio (trumpet). Making guest appearances on the vocal selections were Christopher Cross, Ambrosia’s David Pack and Alex Ligertwood, who was also an original member of The Oblivion Express.

“When I was about 15 years-old, I picked up a copy of ‘Closer To It’ by Brian Auger's Oblivion Express and it changed my life. That is why I was looking forward to doing this record. It was the first time I heard rock musicians playing jazz and it was the first time I knew you didn't have to be a jazz musician to play jazz,” explained Golub. “The vibe of the new record is soul-jazz. It has a lot of Latin grooves - a lot of grooves period. My last couple of records have been blues records, especially the last record was straight ahead blues, but now I’m kind of going back to what I did before that with soul-jazz. No matter what I do is blues-oriented guitar, but the record itself is music that is more jazz oriented.”

The material they elected to record consists of a couple classic cuts Auger recorded with The Oblivion Express (“Happiness Is Just Around The Bend” and “Whenever You’re Ready”), a new Auger tune penned specifically for the Golub project (“Shepherds Bush Market”) and a previous unreleased Auger composition (“Isola Natale”), a pair of new songs co-written by Golub (the title track and “J&B”) and a fistful of fun covers, including Lalo Schifrin’s frisky “The Cat,” Willie Dixon’s “I Love The Life I Live,” Paul Carrack’s “How Long” spotlighting Cross, The Police’s spacy reggae dusted “Walking On The Moon” with vocals by Pack, and Curtis Mayfield’s gritty street life anthem “Pusherman,” which is the first radio single from “Train Keeps A Rolling.”

Harner said, “The whole thing with the Hammond B-3 and the guitar and the Fender Rhodes, it’s got a retro kind of funky groove type vibe. Jeff (Golub) is one of the best blues guitar players out there so this definitely has a bluesy edge to it, but it’s got more of a funky groove than the standard blues approach.”

A Copley, Ohio native who has called New York City home ever since he launched his career in the early 1980s, Golub began as an in-demand sideman who enjoyed long stints touring and recording with Billy Squier and Rod Stewart as well as Tina Turner, Peter Wolf, John Waite, Vanessa Williams, Gato Barbieri and Bill Evans. He released his debut album as a band leader in 1988 and went on to record an impressive string of chart-topping albums and radio hits with Avenue Blue and as a solo artist that made Golub a radio staple, perennial fan favorite and consistently strong concert draw in the contemporary jazz stratosphere.