Tower of Power: Soul Side 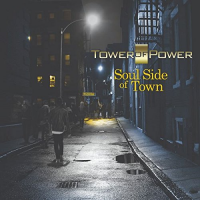 slideshow
In 1970, most of the surging white brass bands that played pop-rock were heavily jazz influenced. The list included Blood Sweat & Tears, Chicago, the Flock, Collective Consciousness Society and the Ides of March. And then there was Tower of Power, a largely white band influenced by the soul-funk feel of the Mar-Keys, the James Brown Orchestra and other high-voltage R&B brass bands. I remember when East Bay Grease was released in 1970. The cover was very cool—a black map of the Bay Area with white streets. The only way you could have known about the album and Rufus Miller's lead vocals is if a friend came back from San Francisco with it.

Oakland after World War II was a solid jazz and R&B hub. Seventh Street was home to clubs featuring home-grown and touring artists who specialized in a mournful blues. In the late 1960s, the historic neighborhood was shredded by the construction of the Bay Area Rapid Transit's above-ground track, eradicating what had been a African-American cultural haven. Much of the blues action shifted to San Francisco's Haight-Ashbury district. Many of the old theaters that became rock concert spaces attracted a significant number of British bands schooled on American blues records and many African-American electric blues guitarists from Chicago. Tower of Power emerged in this environment—part funkified cover band, part band with its own soulful sound.

What made Tower of Power special was its tight horn section (trumpeters Greg Adams and David Padron; and saxophonists Emilio Castillo, Skip Mesquite and Steve Kupka), passionate vocals and standout drummer David Garibaldi. The band paid homage to both the greasy Oakland sound and the earthy soul of Memphis. [Photo above of me in 1973, photographed in high school carrying the Tower of Power LP]

The Tower of Power albums from the early 1970s that came after East Bay Grease were Bump City (1972), Tower of Power (1973), Back to Oakland (1974) and Urban Renewal (1975). All remain superb to this day. In the Slot (1975) and Ain't Nothin' Stoppin' Us Now (1976) had their moments. Perhaps TOP's finest album was Tower of Power, which was flawless from start to finish and included songs such as What Is Hip?, Clever Girl, Get Yo Feet Back on the Ground and Clean Slate.

Hard to believe, but this year is Tower of Power's 50th anniversary. The band began in 1968 as the Motowns, playing soul in Oakland and Berkeley. In 1970, the band dropped its name for the more original Tower of Power in an effort to play the Fillmore. The band achieved national recognition in 1972 with You're Still a Young Man and Down to the Nightclub. Both were from Bump City and both became Billboard pop chart hits. The band's third album, Tower of Power, featured personnel changes, including the addition of Lenny Williams on lead vocals, Lenny Pickett on tenor saxophone and Chester Thompson on keyboards. The band suffered a debilitating blow in 1975 when Williams left the band in to record as a solo artist. Some have argued that the band never recovered its original feel.

Fifty years later, Tower of Power's new album, Soul Side of Town (Mack Ave./Artistry), features four of the band's original members—tenor saxophonist Emilio “Mimi" Castillo, baritone saxophonist Stephen “Doc" Kupka, bassist Francis “Rocco" Prestia and drummer David Garibaldi. The band's arrangements were handled d by David Eskridge, except Butter Fried, which was arranged by Adolfo Acosta and Joe Vannelli. The lead vocalists are Marcus Scott and Ray Greene, and both do a great job. The joy of the album is that many of the songs have a fresh, '70s feel. These include Do You Like That? by Castillo and Mark Dolin, Let It Go by Castillo and Leo Sacks, and Can't Stop Thinking About You by Castillo, Dolin and Vannelli.

Don't expect the album to sound identical to the band's early albums. Instead, view it as an East Bay reboot. The lead vocals are retro strong and the soul remains romantic and pleading. The band's original funk-fortified sound is still there, with the signature tight horn riffs and jumbo-sized drums. I wish I still had my AMC Javelin.

About Tower of Power