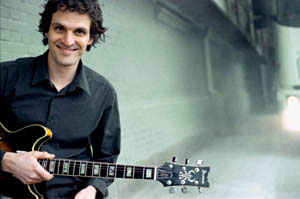 Critics have praised Waldorff's previous efforts for their spirit, balance, and the telepathic understanding among band members. These same qualities are all present on American Rock Beauty, as the quintet leads the listener through a sophisticated blend of styles and beats. There is range of musical atmospheres at play on the album, but they all become one in the hands of these dynamic musicians.

Torben's music is well-established in international press after three widely acclaimed ArtistShare CDs and “Best of 2008 and 2010" listings in US, Canada, France, Portugal, Denmark, Sweden.

In Something Else!'s reviews Best Of 2010 we read: “Each of the songs have an undeniable radiant beauty to them, as Waldorff again spins off effortlessly lyrical songs. The Brian Blade Fellowship meets the Pat Metheny Group."

JazzTimes wrote: “American Rock Beauty has earfeel as a fine Burgundy has mouthfeel."

“Never overplaying, Waldorff seems to tease the maximum amount of emotion from every note he plays." —Matt Warnock

Torben was interviewed in Jason Crane's Jazzsession and JazzInside NY and excellent reviews of the outstanding music are published in many countries. All About Jazz, Downbeat, Jazzweekly, Modern Guitar, Vintage Guitarist, and many more, in Europe Jazzman, Jazzpodium, Jazzmagazine, JazzSpecial, and many many more.