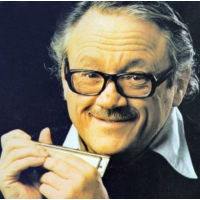 slideshow
Toots Thielemans, a highly gifted swing-jazz guitarist, accordionist, harmonicist and whistler who began recording in his native Belgium just after World War II before relocating to the States in 1952 and was the composer of the jazz standard Bluesette, died Aug. 22. He was 94.

In many respects, Thielemans brought a new level of respect to the harmonica in jazz circles. For years, the chromatic variety was viewed either as a classical reed instrument in the hands of Larry Adler or a novelty mouth organ as played by Johnny Puleo's Harmonica Gang and Jerry Murad and the Harmonicats. Thielemans' advantage was that he had a keen understanding of harmony and could get feet moving swiftly, functioning as an accordionist.

Throughout his career, Thielemans had an innate ability to be in the right place at the right time. In 1949, he was at the Festival of Jazz in Paris where he met many of America' most important jazz musicians. This encounter led to a European tour with Benny Goodman and a Stockholm record date with Zoot Sims in 1950. When Thielemans emigrated to the States in '52, he worked with Charlie Parker, Dick Hyman and many other artists.

Thielemans' versatility came in handy as well. Recording with George Shearing for MGM in the early and mid-1950s, he played mostly guitar and some harmonica. Their close relationship led to a tour with The Stars of Birdland in 1955. When Shearing signed with Capitol that year, the pianist brought Thielemans aboard and they recorded together on most of Shearing's Capitol sessions through Satin Brass in 1959.

By then, Thielemans was making a name for himself as a leader. The Sound in 1955 for Columbia was particularly noteworthy for its use of four trombones on four songs: Lou McGarity, Al Godlis, Billy Rauch and Jack Satterfield. Man Bites Harmonica in 1957, his first album for Riverside, was an ingenious pairing by producer Orrin Keepnews of Thielemans and  baritone saxophonist Pepper Adams. On paper, the combination never should have worked—the gentle, mournful high-pitched harmonica vs. the gruff and bossy baritone saxophone. But it did, especially with the rhythm section of Kenny Drew (p), Wilbur Ware (b) and Art Taylor (d). Thielemans and Adams had swing and a driving playing style in common.

The Riverside session led to one of Thielemans'  most superb 1950s albums—Time Out for Toots, on Decca (1958). Four of the tracks—The Nearness of You, The Cuckoo in the Clock, Body and Soul and A Handful of Stars—featured Urbie Green, Billy Byers and Sonny Russo (tb); Toots Thielemans (hca,g); Hank Jones (p); Bucky Pizzarelli (g); Doug Watkins (b) and Art Taylor (d), arranged by Ralph Burns. Burns also arranged Clap Yo' Hands, Them There Eyes, Early Autumn and You Took Advantage of Me, with Toots Thielemans (hca); Al Cohn and Zoot Sims (ts); Al Epstein (as); Danny Bank (bs); Hank Jones (p); Barry Galbraith (g); Doug Watkins (b) and Art Taylor (d).

As the 1950s wound down, Thielemans began recording with Peggy Lee (Beauty and the Beat), with Shearing. He also recorded an avant-garde album (Lute Song) as a member of the Raymond Scott Plus the Secret Seven (for my post on this group, go here). In the early 1960s, Thielemans returned to Europe for a few yaers and recorded for labels there. In 1963, he recorded Bluesette for ABC-Paramount while in Sweden. The song and album became a huge hit, and the song became Theielmans most popular recording.

In the 1960s and '70s, Thielemans albums became pleasantly commercial, particularly his work with vocalists, Quincy Jones and violinist Svend Asmussen. He also was featured in movie soundtracks and TV scores. His last known recording was in 2011 with Gregoire Maret.

Here's Thielemans with Ellis Regina in Sweden in 1969 performing his own Bluesette...

And here's Thielemans and Bill Evans on Evans's album Affinity in 1978 playing I Do It for Your Love...