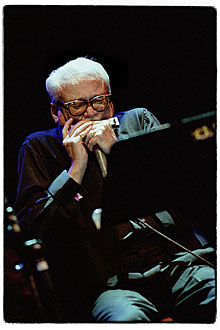 slideshow
Toots Thielemans, the man who made the harmonica a well-known jazz instrument died today in Brussels, Belgium, his hometown. He was 94. Thielemans was recently hospitalized after a fall that resulted in a broken arm, but neither his family nor management representatives specified the cause of his death.

On an instrument often dismissed as a novelty, Thielemans’ advanced musicianship and individuality made him a respected colleague of Charlie Parker, Dizzy Gillespie, Benny Goodman and George Shearing, with all of whom he played. In Shearing’s quintet, he played both harmonica and guitar. Thielemans inspired a number of younger musicians to concentrate on the harmonica. In the 1950s, saxophonist Eddie Shu added the harmonica to his performances, as did Howard Levy later. Contemporary players include Grégoire Maret, William Galison, the young Swedish musician Filip Jers and the German virtuoso Hendrik Muerkens. None of them has achieved Thielemans’ popularity or the level of familiarity he attained through exposure on movie soundtracks, guest shots on albums by Billy Eckstine, Billy Joel and Julian Lennon, and appearances on television’s Sesame Street. For a thorough review of Thielemans’ career, see the obituary by Peter Keepnews in today’s New York Times.

My heavily-traveled weekend with an assemblage of couples out for a good time included an evening at Jazz Alley in Seattle eating well and hearing Toots Thielemans, Kenny Werner and Oscar Castro-Neves. Thielemans is a member of that astonishing corps of world-class jazz octogenarians (Hank Jones, Marian McPartland, James Moody, Dave Brubeck, ClarkTerry, Buddy DeFranco) who seem uninterested in slowing their pace, let alone retiring. At eighty-three, his polish, harmonic daring and swing on the harmonica keep him the undisputed champion not only of that unlikely jazz instrument but of all instruments that show up in the jazz magazines’ “miscellaneous” poll categories.

When it comes to Thielemans’ level of musicianship, categories don’t matter. He would likely be as creative if he played comb and tissue paper. Thielemans and Werner, long established as a formidable duo, became a virtual chamber orchestra with the addition of Castro-Neves’ guitar. There were moments at Jazz Alley when the piano, guitar and harmonica melded into chords so expansive and deep, it seemed impossible that they came from only three instruments. The authenticity of Castro-Neves’ Brazilian rhythms and bossa nova spirit were an essential part of the set’s air of happiness. An inveterate quoter, Thielemans now and then broke himself up with some of his allusions. He threw sly glances at Werner as he worked snatches of several other Frank Sinatra hits into his solo on “All The Way.”

On some pieces, Werner supplemented his piano with an electronic keyboard. His goal may have been to create atmospherics, but rather than enhance the sublime quality of the ensemble, his synthesizer “sweetening” diluted it. A pianist of his protean capabilities needs no digital reinforcement, as he demonstrated in brilliant solos on “The Dolphin,” “Chega de Saudade,” and an unlikely neo-samba treatment of “God Bless America.”

The trio’s treatment of the Irving Berlin classic inspired a standing ovation, then a short speech by Thielemans about how jazz and the American people drew him to move to the United States from Belgium in 1957 and to become a US citizen. He talked about his love of Louis Armstrong. Then, as an encore, Thielemans, Werner and Castro-Neves played “What a Wonderful World.” For the ninety minutes of their set, the world, the band, the audience, the club, were wonderful. Everything was wonderful.

Here are Thielemans and Werner seven years later, without Castro-Neves, at Théâtre Maisonneuve in Montreal, playing “The Days of Wine and Roses,” a song associated with Thielemans nearly from its birth.