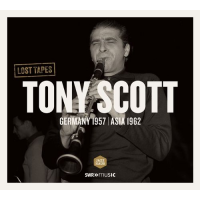 slideshow
Clarinetist Tony Scott wasn't a fan of vibrato. Adding it would only have smoothed out his sound and landed him in the shadow of Artie Shaw and Buddy DeFranco. Instead, he preferred to stand out with a hoarse, stripped down, high-register tone. To the uninitiated, Scott could sound sour and breathless, like someone who hadn't yet fully mastered the complications of the instrument. But once you're acclimated to Scott's approach, you will find much to admire in his style, and you'll crave his textured, uneven delivery.

If you dig Scott as much as I do, you'll be gratified to learn that Tony Scott: Lost Tapes, Germany 1957 and Asia 1962 (Jazzhaus) is out this week. The album of previously unreleased material features Scott recording in a studio and on stage in Stuttgart, Germany, in 1957, and in performance in Hong Kong and Singapore in 1962. These recordings are notable because we get to hear Scott in Germany at the height of his Down Beat critics' poll prowess in the late 1950s. We also hear Scott just before he abandoned jazz for six years to focus on New Age and World music.

His recordings in Germany with local sidemen are divided among cool and spirited. The studio ballads like The Man I Love, Lover Come Back to Me and You Go to My Head are haunting while the live material is up-tempo and gripping, particularly a hyperactive A Night in Tunisia, There Will Never Be Another You and All the Things You Are. The album's last four tracks were recorded live in Asia with Italian musicians. Three of the songs—Blues for Charlie Parker, Hong Kong Jazzclub Blues and All the Things You Are—sizzle with instrumental daring. On Moonlight in Vermont, the last track recorded in Singapore, we hear a gorgeous version of the standard, which makes for a nifty contrast with the album's first track—the exact same tune recorded five years earlier in Germany. Turns out they're both hip for different reasons.

Following the 1962 recordings, Scott would go off in other musical directions until 1968. During this period, he recorded Music for Zen Meditation (1964), Djanger Bali: Tony Scott and the Indonesian All Stars (1967), Atmospheric Conditions Permitting (1967) and Music for Yoga Meditation and Other Joys (1968).

JazzWax clip: Here's The Man I Love from the new Lost Tapes album...