SOURCE: ALL ABOUT JAZZ PUBLICITY
November 19, 2008
Sign in to view read count 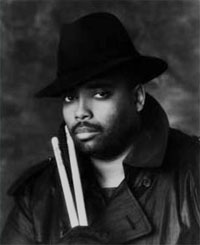 A man with a big heart and a big beat, drummer Tony Reedus cared for other people the way he cared about making a band swing.

“He was true blue, he'd do anything for you," said pianist Mulgrew Miller, who knew Mr. Reedus as a youth in Memphis, where the drummer was born, and later employed him in his trio in the late 1980s and early 1990s.

“He was supersensitive," said his wife, violinist Jenise Grice-Reedus. “He'd see a person who was sad and would go talk to that person, and would have another friend for life."

“He was a funny guy," said organist and pianist Mike LeDonne, with whom Mr. Reedus regularly performed. “Just a sweetheart, that's what Tony Reedus was, and great to work with."

Mr. Reedus died Sunday of a pulmonary embolism en route by ambulance to Jamaica Hospital Medical Center in the Richmond Hill section of Queens. He had collapsed at John F. Kennedy International Airport after getting off an American Airlines flight from Bologna, Italy, where he had been performing with LeDonne. He was 49.

Mr. Reedus lived in Irvington with his wife and their 5-year-old daughter, Cameron. He had been troubled with undetermined gastrointestinal issues since August.

A superb musician, Mr. Reedus picked up the drums when he was 13 and broke into the upper echelon of jazz just seven years later, performing and recording with innovative trumpeter Woody Shaw. In a story in The Star-Ledger in 2006, he likened joining Shaw to a baseball player “going from single-A to the Show."

“It was music on such a high level," said Mr. Reedus.

He played on Shaw's albums United (Columbia) and Master of the Art (Elektra/Musician).

Mr. Reedus was noted for his all-around drum kit acumen -- in particular, his ride cymbal beat. “He had a real wide beat, and his feel on the cymbal was unique," said Stryker, whose organ trio included Mr. Reedus for several years. “He felt great to play with, just really swinging, dancing."

Of the importance of that beat, Mr. Reedus said in 2006, “It's a heavy feeling that makes people want to pat their feet, sway back and forth. When people come to see you play, they want to escape, they want to feel good. Music is a celebration of life that comes from the heart."

Mr. Reedus returned to college in the middle of his career, earning a B.A. in music from Rutgers University-New Brunswick in 2005. “The day he graduated was one of the happiest days of his life," said Grice-Reedus, who plays with the Garden State Philharmonic and the Plainfield Symphony and leads the Ebony String Quartet.

Another was the birth of his daughter. “He loved being a father, being married," said Stryker.

Linda Grice, Mr. Reedus' mother-in-law, said: “He loved his family; he took good care of my daughter and my granddaughter."

Mr. Reedus' survivors include his brothers Chris and Keith, both of Memphis.

A visitation will be held Sunday at 2 p.m., with services at 4 p.m., at the Prospect Presbyterian Church, 646 Prospect St., Maplewood. More information is available by calling (973) 763-8955 or visiting the church's website (prospectchurch.org).