It is into this utopian musical world that listeners are delivered on Tony Adamo and the New York Crew, the newest and most eclectically joyous release from an artist who is unapologetically beyond time. 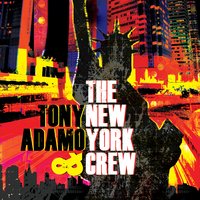 In 2015, where an always-connected generation screams for attention through new, often contrived definitions of “cool” and surprisingly predictable proclamations of uniqueness, singer and spoken word artist Tony Adamo arrives seemingly from nowhere as a true anachronism: a performer who is authentically “cool” in a timeless, almost reckless way that almost no popular artist today can match.

Adamo harkens back to a day that, for most modern listeners, never was: a time in the 50s and 60s when a small but influential cast of artists in jazz, poetry and movies oozed a dangerous, irresistible force that men admired and women wanted. The Rat Pack sort of had it, but for each Sinatra or Martin, there were hundreds of underground artists who lived more dangerously and closer to their creative edge. With jazz as the centerpiece, Adamo effortlessly visits this universe (“Just ride your thought on that groove…are you with me?”) where performers are “cats” that their fans “dig” or even “double dig”; where hipster artists “swing” with the beat, and music is a near religious experience for those immersed naturally or through chemical enhancements.

It is into this utopian musical world that listeners are delivered on Tony Adamo and the New York Crew, the newest and most eclectically joyous release from an artist who is unapologetically beyond time. Using a style he calls Vocal/HipSpokenWord, Adamo creates an eleven chapter visit to a New York that only ever existed for a few, but is so clear in its painting that the listener pines for it.

The album is rarely heavy, but Adamo lightens it further in spots, paying a fun, instrumental tribute to 40s swing in “To Bop or Not to Bop,” and moving from history teacher to wise, playful older brother, singing instruction to a young man on the hip life on “You Gotta Be Fly.”

The band is 100% on point throughout the disc, and Adamo gives them room to breathe. Whether or not Tony Adamo’s poetry hits you right, it is impossible to deny the irresistible sound of The New York Crew, a band led by producer and drummer Mike Clark, pianist Michael Wolff and trumpeter Tim Ouimette, all returning from Adamo’s Miles of Blu album. But, like Kirk Franklin in front of a Gospel choir, without playing a note, Adamo keep's the listener’s rapt attention, preaching, teaching, cajoling and tempting with a brand of poetry will hit dead home for listeners open to its unusual message and cadence.

Tony Adamo and the New York Crew will undoubtedly stretch the taste of listeners more accustomed to the narrow formulas of modern music – especially modern radio. But for those willing to be pulled in unusual, sometimes unexpected directions lyrically and musically, it is an eclectic, left field find that you won’t easily forget, and that you may just come to cherish. Recommended.