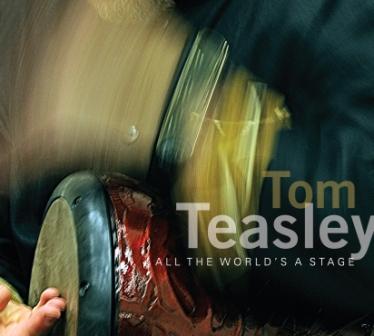 slideshow
New CD, the Eighth from Acclaimed Percussionist, Will be Released on July 10

All the World's a Stage is more than merely the title of multi- instrumentalist Tom Teasley's eighth CD - it's an apt metaphor to describe the career of this prolific composer/percussionist/musical ambassador. With the July 10 release of this new CD, on which Teasley plays a dozen different instruments on a collection of nine original tracks, he once again taps the multi-cultural collage of influences that have served to earn him two prestigious Helen Hayes Awards for outstanding sound design, as well as accolades for his previous recordings from such critical taste-makers as Willard Jenkins, who lauds Teasley as “a restless explorer and voracious learner," whose “pallet of instruments and expressions....is staggering in sheer variety..." According to the Washington Post, “Teasley is “a composer and a percussionist in the widest and most exuberant sense of the word."

Teasley says that All the World's a Stage represents “a snapshot of all of my recent work - my solo performances, where I perform on multiple instruments and create virtual ensembles through the use of digital looping, and my composing and performing for various theater productions, ranging from Mary Zimmerman's 'Arabian Nights' to the Indian epic 'The Ramayana' to the upcoming 'Conference of the Birds,' which is based on a seminal work by the Persian poet, Farid ud-Din Attar. Perhaps most importantly, it's inspired by my experiences as a cultural envoy for the US State Department, traveling to and collaborating with master musicians in Iraq, Bahrain, Saudi Arabia, and Jerusalem.

While some of the CD's nine original compositions did evolve from Teasley's work in the theater, his unbounded creativity has given them an entirely new shape and form on All the World's a Stage. For example, characters from two stage works - the Polish scientist Foustka of Valclav Havel's “Temptation" and the Hindu god Varuna of “The Ramayana" - come together on the disc's “Fuska and Varuna," on which Teasley incorporates South Indian vocal percussion (konnakol) into the track's ethereal mix of electronic and traditional percussive elements.

On that track, as on the CD's eight others, Teasley is the only musician. In the course of All the World's a Stage's musical expedition, he plays a total of a dozen instruments (in addition to konnakol and American beat-box), some time-honored and familiar, such as the West African balafon and the Irish bodhran, others more contemporary, such as the Aquasonic, a metal base filled with a small amount of water, with spokes of different length that are bowed with a cello bow. Says Teasley, “I also combine various electronic percussion, such as the Korg Wavedrum and MalletKat, to create music that not only spans a wide global reach but combines ancient and futuristic traditions."

In addition to the large array of exotic percussion, Teasley utilizes the melodica to provide the music's primary melodic voice. “I've discovered, being a percussionist playing a wind instrument, in this case the soprano, alto and bass melodica, has given me expressive control that I hadn't previously explored by usual percussive means," he explains.

A three-time recipient of a Fulbright-Hayes grant for performances in the Middle East, Teasley has collaborated with indigenous musicians and given historic performances in Saudi Arabia, the West Bank and Jerusalem. “My touring to the middle east is a huge influence on my music," he notes. “Musically there is so much I have learned, and have also been able to share on these tours. Perhaps most important is the emotional impact they have had on me and, as a result, on my music. I remember performing with Anasheed (the premier singing and drumming troupe in Jerusalem) during Ramadan at a post Iftar dinner at a refugee camp in Ramallah. I remember performing with oud master Duraid Fadhil and member of the Iraq Symphony in sectarian-torn Baghdad. 'Nights Over Baghdad' was inspired by my collaborations in that city one night, reflecting on the power of music to communicate, and my admiration for the courage of my collaborators. All of these memories, these experiences, are expressed through the music on this CD."

At the same time beautifully simple and exquisitely complex, the culturally diverse music on All the World's a Stage does convey a message of sorts. Teasley continues, “I also remember demanding women be allowed into the same room where my performance was being held, instead of having to listen to a live broadcast of it from a room in the basement, in Saudi Arabia. Using music as a means to move the marker of social justice and understanding gives it a power beyond whatever esthetic value it may have."

The sounds of Africa also percolate through Teasley's work. While he's certainly not the only western musician to integrate either or both African and middle-eastern rhythmic elements into jazz or classical pieces, he also firmly embraces being an American musician. “I was trained in western orchestral percussion at Peabody Conservatory, and studied extensively with master jazz drummer Joe Morello. Much of my playing style is drawn from taking an instrument from one part of the world, perhaps the Irish bodhran, and incorporating a technique from another tradition, such as ancient Mesopotamia," explains Teasley. “I filter this pan global approach through the rhythmic DNA of American music, which of course includes jazz as well as funk, blues, and other urban rhythms." This remarkable fusion of various musical rhythms and traditions has served the percussionist well; his most recent release, 2007's Painting Time, which marked his fifth outing as a leader and eighth recording overall, earned him considerable critical acclaim and spent several weeks in the Top 20 on the CMJ Jazz chart.

As he gears up for the release of All the World's a Stage, Teasley will shift his focus to the theater, working on “Conference Of The Birds" under the direction of acclaimed director Aaron Posner, which will open October 23rd at the Folger Theatre, and with the Constellation Theatre Company in Washington, DC on a May production of Mary Zimmerman's “Metamorphoses." He's also continuing to pursue a relatively new project: setting film to his original music, most recently performing to Lotte Reiniger's animated fairy tale of 1926, “The Adventures of Prince Achmed," an adaptation of Fritz Lang's 1927 German Expressionist masterpiece, “Metropolis," and some early avant garde films by Hans Richter. Teasley's work has also led to keynote speaking engagements about his global travels as musical ambassador and cultural envoy.

Once again, Teasley finds that these projects and his recordings integrate with each other in unpredictable but exciting ways. “I have found that these films create a visual 'form' that is perhaps more abstract than a traditional song form, but there are also many similarities. I have found that setting text to my music in the theater pieces has allowed me to discover rhythm and melodic contour in the words. All of these influences are finding their way into the music that I create, regardless of the context."

A tribute to Teasley's standing in the creative community, the CD features liner notes written not only by the pre-eminent jazz writer/broadcaster Willard Jenkins, but also by Nelson Pressley, a theater critic for the Washington Post, and by Martin R. Quinn, former Minister Counselor for Public Affairs at the US Embassy in Baghdad.

Almost from the outset, Tom Teasley has brought percussion up from the background, profoundly demonstrating its strength in solo performance. He is “a percussionist in the widest and most exuberant sense" says the Washington Post, calling his contribution to D.C.'s Contemporary Music Forum “the evening's dazzler." He's a “creative bonanza," claims Bruce Wittet in Modern Drummer Magazine; “... give Tom a bass drum, a snare drum and a djembé and he'll give you part Stravinsky, part Art Blakey."

Teasley is a multi-dimensional performer and composer, crossing the boundaries of solo performance through the use of instruments from the world over, and cross-pollinating techniques from diverse traditions, and combining ancient percussion with digital technology.

As a Cultural Envoy, Teasley has traveled throughout the Middle East on behalf of the US State Department, giving historic performances in Bahrain, Saudi Arabia, Jerusalem, and Iraq in collaboration with indigenous musicians as well as in solo concerts and educational programs. He also shares his engaging experiences and global travels as musical and cultural ambassador in his keynote speaking engagements. He is the recipient of three Fulbright-Hayes Awards. He has also toured extensively, performing at world music and percussion festivals across the US, Europe, South America, New Zealand and Samoa.

Taking his music beyond the concert arena, Teasley has also performed with individual visual artists, such as performance artist Nick Cave, and with art galleries, including Washington, DC's Kreeger Museum of Art, the Taubman Museum of Art in Roanoke, Virginia, and the Philadelphia Textile Museum. He's equally renowned as a theatrical composer, sound designer and performer, and his work has earned him two Helen Hayes Awards (and a third nomination) for outstanding sound design for productions as several Washington, DC, theaters, including the Constellation Theatre and the Folger Theatre. In addition, he has performed with the National Symphony as both a composer and a soloist, and has been an artist-in-residence at the Kennedy Center for the Performing Arts and at the Levine School of Music.

A dedicated educator, Teasley continues to explore new instruments and playing techniques, and to share his newfound experience in various workshops and clinics. PASIC (the Percussion Arts Society International Convention) broke with tradition to feature his presentations three times at the world's largest gathering of percussionists. He has also been a clinician/artist-in-residence at Eastman School of Music, Peabody Conservatory, and University of Maryland, among others. His innovative fusion of jazz, world and western classical music has earned him endorsements deals with Cooperman Drum, L.P. Music, Vic Firth sticks, Remo, Sabian Cymbals and Yamaha Concert Percussion. Teasley is proud to be supported by The Virginia Commission for the Arts and The National Endowment for the Arts.