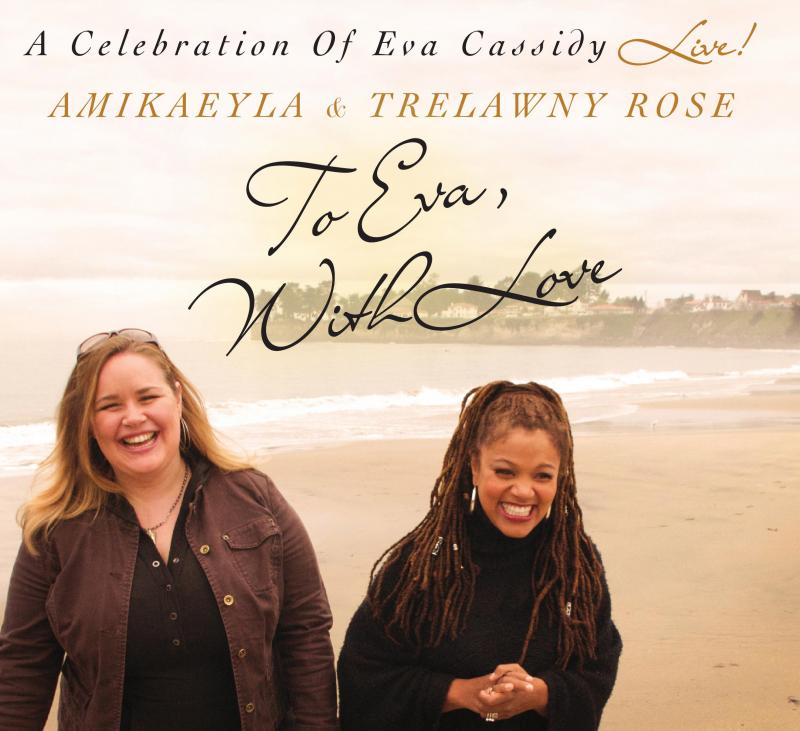 slideshow
For Bay Area jazz singers Amikaeyla and Trelawny Rose, the late Eva Cassidy is a potent source of inspiration, a shared passion, and a profound influence on their respective musical paths. They pay tribute to Cassidy on their new CD To Eva, With Love, which was recorded live at Kuumbwa Jazz Center in Santa Cruz, California, and will be released nationally by Wayne Wallace's Patois Records on June 14.

In the works for three years, the CD has been a labor of love on the part of both singers for the music of Eva Cassidy, whose premature death from melanoma in 1996, at the age of 33, left a still devoted international community of fans&#151Amikaeyla and Trelawny among them.

“Eva was a vocal pioneer," says Amikaelya, who like Cassidy was from the Maryland/Washington, DC area and hung in the same musical circles. “She sang what and how she felt, and she inspired other vocalists and musicians. Once you heard her, you never forgot her."

The project was conceived with a superb cast of musicians equally versed in jazz and Latin idioms, including Grammy-nominated trombonist Wayne Wallace, whose big, burnished sound often serves as a striking foil to their vocals, and four-time Grammy Award-nominated percussionist John Santos, who also contributes a soul-stirring solo on his original “Prayer for Eva," an Afro-Cuban invocation. Veteran bassist David Belove, drummer David Flores, guitarist Vince Mellone, and keyboardist Simon Rochester round out the ensemble.

“We started with Eva's original recordings and arrangements," Trelawny says. “We would jam with it, play with it, and let it flow into new places. We wanted to capture the way she was at home in so many different styles. She had a hard time getting a record deal, because she was into so many different genres. She really did follow her heart. She can sing the heck out of a gospel song, deliver a lilting Irish tune, or get a pure, almost classical tone."

That stylistic range is explored by the duo with their performances of Sting's “Fields of Gold," “Over the Rainbow," and Buffy Sainte-Marie's “Tall Trees." Each singer delivers a pair of solo numbers as well, with Amikaeyla stepping out on “Autumn Leaves" and Cassidy's signature song “Nightbird," Trelawny on “Danny Boy" and Curtis Mayfield's “People Get Ready."

Before moving to the East Bay in 2007, Amikaeyla recorded a solo album (Mosaic, 2004) that earned her eight Washington Area Music Association Awards, or Wammys, including best jazz vocalist, best jazz recording, and best debut album. She's currently at work on a new solo project, Being in Love, with players such as Esperanza Spalding, Sheila E., percussionists John Santos and Glen Velez, and Flecktone founding member Howard Levy. In addition to her work as a performing and recording artist, Amikaeyla runs a nonprofit—the International Cultural Arts & Healing Sciences Institute—which has partnered with the U.S. Consulate General's Cultural Affairs office and U.N. affiliate organizations, promoting her “Music as Medicine: Healing with an Artful Purpose" programming. ICAHSI focuses on mothers, youth, and children in at-risk and refugee communities.

Trelawny Rose, a Berkeley native raised in Oakland and Santa Cruz, started attending Jazz Camp West at age 12. It was there she first met Oakland Interfaith Gospel Choir (OIGC) director Terrance Kelly, jazz singers Faye Carol and Madeline Eastman, and vocal improvisation guru Rhiannon, who continue to be her most significant mentors. During her ten-year stay with OIGC (starting at age 17), Trelawny developed as a soloist, recorded several albums, and toured Israel and Australia. She earned a degree in vocal performance from Holy Names University and moved to Los Angeles, where she established herself as an in-demand vocal coach. Her collaboration with Amikaeyla was a major factor in Trelawny's relocating back to the Bay Area, where she maintains a busy performance and teaching schedule; she's also working on a solo album.

About Amikaeyla and Trelawny Rose