The club most definitely had a transformational effect on the jazz scene of its day. The consistent inspiration and intensity of the classic live recordings made there continue to provide a living legacy we can all be proud of. 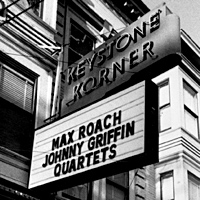 slideshow
The great pianist/composer Mary Lou Williams referred to Keystone Korner as “the Birdland of the Seventies.” Art Blakey, Miles Davis, and Stan Getz all agreed that Keystone Korner was “the best jazz club in the world.” Producer and former Keystone proprietor Todd Barkan feels strongly that “the club most definitely had a transformational effect on the jazz scene of its day. The consistent inspiration and intensity of the classic live recordings made there continue to provide a living legacy we can all be proud of.”

Photographers Brian McMillen, Tom Copi, and Kathy Sloane are preparing a special Keystone Korner slide show to be enjoyed at all three venues.

“Keystone Korner was a place that I really liked to play, especially because it was a real jazz club operated by a clubowner who actually loved the music,” remembers the legendary saxophonist Charles McPherson. “It makes all the difference in the world in terms of setting the proper tone, vibe, and intimate and relaxed relationship between the musicians and the audience.” McPherson worked regularly at the Keystone during its storied eleven-year run (1972-1983) and headlined its final week from July 6-11, 1983, along with the George Cables Trio.

“It’s all about remarkable crossings,” reflects bassist Ray Drummond, who played an integral role in opening the new North Beach jazz club on July 7-8, 1972, as an anchor of the Michael White Quartet with Ed Kelly and Kenneth Nash. “I met Susan, my wife of over 44 years, there. Keystone Korner was—much like Bradley’s back in New York City—an absolutely indispensable part of the true jazz community. All kinds of musicians from all over the world looked forward to playing there. A very magical time and place, a big part of my life in this music.” As a 25-year-old pianist, Todd Barkan tried in late June 1972 to get a gig at the original Keystone Korner for the Latin jazz band he was working with at the time, Kwane & The Kwan-ditos. Then-clubowner Freddy Herrera told him that “I really don’t think your group will work for this room, but I am trying to sell this little joint and buy a much bigger rock venue in Berkeley. Why don't you buy this place so you can hire your own band?”

Barkan recalls that “I only had a little over $8,000 to my name at that time, but, to make a long story much shorter, I wound up buying the club for $5,000 down plus $400 a month until the total of $12,500 plus interest was paid off. It cost another $750 to transfer the beer license to my name. Two major benefit concerts at the Oakland Paramount Theater later—first with Rahsaan Roland Kirk, McCoy Tyner, Freddie Hubbard, McCoy Tyner, Ron Carter, and Elvin Jones, then with the bands of George Benson and Grover Washington, Jr.—and we managed to buy a hard liquor license and a little full-service kitchen with which we could well serve all ages of jazz lovers.”

“The fact that I was able to share so many bright moments with the Bay Area’s jazz community is one of the most wonderful blessings of my life in this music,” Barkan continues. “I could not any more deeply appreciate the generous opportunity that Tim Jackson, Barbara Douglas Richling, and Flicka McGurrin and all the participating artists are providing for me to try and share a bit more with one of the best audiences that ever graced our music.”