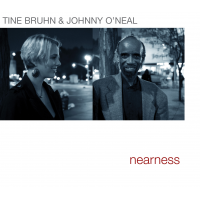 Tine Bruhn (pronounced Tina Broohn) moved to New York City in 2001 after having graduated from Berklee College of Music in Boston. She quickly became part of New York’s jazz scene performing at some of the city’s best music venues including Smalls and Bar Next Door. She consistently plays with some of the top musicians in NYC and she has become a regular at the well-known jazz club Zinc Bar. Ms. Bruhn performs weekly in duo setting with pianist Johnny O'Neal (Art Blakey’s Jazz Messengers, Milt Jackson) at Robert on Columbus Circle.

The Denmark-born singer grew up in Flensburg, Germany where she started her music career at an early age. At 15 she founded the vocal group “Kvart I Fire" which gained high recognition in the region, especially after the release of their CD Go 4 it. Additionally Tine sang in the semi-professional classical choirs “Landes Jugend Chor Schleswig Holstein” and “Jugend Kammer Chor Flensburg/Kiel”. Around that time she discovered her passion for jazz and went to many of the live jazz concerts by visiting Danish musicians such as NHØP and Danish Radio Big Band. The passion became so strong she decided to make the big move to the United States, enrolling at Berklee. In Boston she studied with Sheryl Bentyne (Manhattan Transfer), Walter Beasley, Grammy award winner Richard Evans, and distinguished educator Bob Stoloff.

Tine’s debut CD, Entranced (2009) and featured Greg Hutchinson on drums and Maurice Brown on trumpet. It received stellar reviews in both the US and Europe as well as getting airplay on radio stations around the world.

Tine Bruhn’s new release, nearness (Burner Records), is a duo recording of standards with pianist Johnny O'Neal. Tine Bruhn and Johnny O’Neal started working together in the summer of 2011 when her regular pianist had to cancel on short notice and sent Johnny O’Neal as a sub! Since then they have appeared almost weekly at Robert Restaurant in NYC.

Mr. O'Neal has played with Art Blakey, Dexter Gordon, and Lionel Hampton to name just a few. He has opened for Oscar Peterson at Carnegie Hall and he played the role of Art Tatum in the Oscar winning movie “Ray" based on Mr. Peterson’s recommendation. In a recent JazzTimes article, O’Neal is named as “one of jazz’s best-kept secrets”.

This recording is a natural ‘documentation’ of the musical relationship between these two very different musicians. Different in the sense of background, age, ethnicity, gender. But musically they complement each other. The music was recorded in only one day with just two takes per song. Johnny O’Neal states, “We just went in there and laid it down! It just felt right!” Tenor saxophonist Stacy Dillard is featured on four tracks. Ben Ratliff (New York Times) calls Dillard “a young saxophonist of serious promise.” Dillard’s played with Wycliffe Gordon, Eric Reed, and Roy Hargrove, et al.

As Spike Wilner (Smalls Jazz Club, NYC) writes in his liner notes: “Tine Bruhn for me is an interesting throwback to another age - one of cool elegance and poise. Her demeanor and look are distinctly ‘jazz age’, as if she could step out of a Fitzgerald novel. Her voice has a throaty comfortableness and her feel is an easy, swinging and true jazz feeling. Her repertoire, similarly, is classic in its choices. Real Tin-Pan Alley. Joined here on this recording by a true master, Johnny O'Neal and a young master Stacy Dillard, this blend has an authentic feel. I'm sure you'll enjoy this selection of tunes and be glad to get to know Tine Bruhn.”