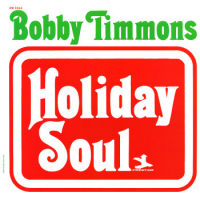 slideshow
Each year, for the past eight years, I've chosen a  jazz or pop album for induction into my JazzWax Vintage Holiday Album Hall of Fame. To qualify, the album has to be a sleeper of sorts, usually from the 1950s or '60s. It also has to swing.

This year, I'm welcoming two albums with the same title: Bobby Timmons' and Don Patterson's Holiday Soul. Both trio albums were recorded for Prestige in Nov. 1964—the former on the 24th and the latter on the 25th. On the first, jazz-gospel pianist Timmons was joined by bassist Butch Warren and drummer Walter Perkins. On the latter, organist Patterson was backed by guitarist Pat Martino and drummer Billy James.

Both Prestige albums are available at iTunes.

And here's Don Patterson on What Are You Doing New Year's Eve...

Now meet the rest of the JazzWax Vintage Holiday Album Hall of Fame family and their year of induction...

Here are albums that have already been inducted into the JazzWax Holiday Album Hall of Fame... - See more at: http://www.jazzwax.com/2012/11/duke-pearson-merry-ole-soul.html#sthash.V0RZmXiQ.dpuf