SOURCE: ALL ABOUT JAZZ PUBLICITY
April 25, 2008
Sign in to view read count 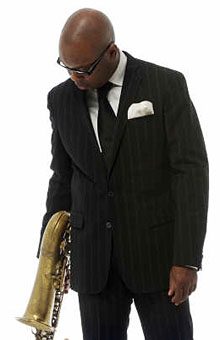 In 1990 Tim Warfield, Jr. was chosen to be a member of trumpeter and CBS/Sony recording artist Marlon Jordan's Quintet. In 1991 he was selected to record Tough Young Tenors on the Island/Antilles label, listed as one of the top ten recordings of the year by the New York Times. He also joined Jazz Futures, a world touring group assembled by George Wein to showcase some of the world's brightest young stars in jazz. Also in 1991, Warfield placed third at the Thelonious Monk International Jazz Saxophone Competition held at the Smithsonian Institution in Washington, D.C.

Holmes' talent as a child was impressive enough for his mother to suggest he pursue an education in music. With Joel's promise to work hard, the family relocated fro Arizona to Baltimore so he could attend the Baltimore School for the Arts. It was at school during Black History Month where Joel heard the musical sound that would change his life, “I first heard ragtime at music class. It was like a window opening." With a growing passion, Joel soaked up a steady influence of jazz greats like Oscar Peterson and Art Tatum.

After high school, Joel attended the acclaimed Peabody Conservatory of Music at John Hopkins University. He gained popularity with his fellow students playing impressive performances at various festivals and venues.

Tim Warfield, Jr., a native of York, Pennsylvania, began studying the alto saxophone at age nine. He switched to tenor saxophone during his first year at William Penn Sr. High School where he participated in various musical ensembles, winning many jazz soloist awards including second out of forty competitors at the Montreal Festival of Music in Canada. After high school, Warfield attended Howard University in Washington, D.C. for two years before leaving to lead and co-lead groups in the Central Pennsylvania and Baltimore/Washington areas.

Warfield's first recording, A Cool Blue, was selected as one of the top ten recordings of the year in a 1995 New York Times critic's poll, as was his 1998 recording Gentle Warrior (featuring Cyrus Chestnut, Tarus Mateen, Clarence Penn, Terell Stafford, and Nicholas Payton), proclaiming him possibly the most powerful tenor saxophonist of his generation. In 1999, he was awarded “Talent Deserving Wider Recognition" in DownBeat Magazine's 49th Annual Jazz Critic's poll. In 2000, alongside crooner Loston Harris, Warfield performed at the MTV GQ Men of the Year Awards in New York City.

In the fall of 1999 Warfield exclusively joined forces with New Orleans trumpeter and Warner Bros. recording artist Nicholas Payton of with whom he toured and recorded until 2005.

Warfield has appeared on several GRAMMY-nominated recordings such as Stefon Harris' “The Grand Unification Theory," as well as “Dear Louis" and “Sonic Trance," both under the leadership of trumpeter Nicholas Payton.

Joel Holmes was born in Arizona on December 6, 1982. Three years later, the family moved to Virginia. It was Joel's mother, Theresa who first noticed her son's early musical talent when Joel would sit at the piano and play tunes by ear. Encouraged by his initiative, his father Dennis, a trumpet player for the Old Guard Fife and Drum Corp in Fort Myer, started off his music education by teaching him all he knew about basic piano.

Joel has studied with Bobby McFerrin, Roy Hargrove, Gary thomas, and a host of other respected musicians. He has also taught music and theory at the Rock Junior Academy, the Baltimore School for the Arts and has over 15 private students. A recent Bachelor of Arts graduate from the Peabody Conservatory in Jazz Performance, Joel's accolades include a gold medal in the Act-so Competition of the NAACP, a silver medal in the Local and National Levels, an honorable mention in the John Lennon Songwriting Competition, a finalist in the 5th annual Independent Music Awards, a recipient of the Maryland State Arts Council Grant, and an honorable mention in the Vh1 song of the year awards.

Now at 23, Joel composes his own style of music blending an array of traditional and contemporary jazz, gospel, R&B, soul, hip-hop, neo soul, funk, classical and pop. His states, “My music is a direct expression of musical influences, spiritual freedom and personal interpretation." In addition, he plays a repertoire of over three hundred well-known tunes He has opened for The Temptations, The Manhattans, Tonex, Regina Bell and Phil Perry.

Joel has had the honor of performing at The Kennedy Center, Meyerhoff Symphony Hall, The Litchfield,Hartford and Columbia jazz festivals, aswell as the Morgan State University's tribute to Baltimore Legends. The group is currently getting radio airplay at Mosaic Online, a popular online jazz radio station, 88.9, Morgan State University jazz station.

Because of his increasing popularity, Joel Holmes is touring extensively throughout the East Coast. In September 2005, he performed in Taiwan and Singapore. His debut album is entitled, “Eternal Vision."