Tim Hagans Assertive Trumpeter is Muted, but Not Shy 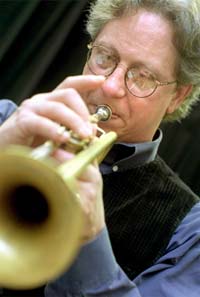 slideshow
The trumpeter Tim Hagans makes an art and science out of assertiveness. Repeatedly during his first set at Birdland on Wednesday night he unfurled long arcs of eighth notes, clipping each one neatly at the end.

His businesslike facility on the instrument, along with the hard gleam of his tone, was impressive even when it wasnt quite absorbing.

A decade ago Mr. Hagans applied these skills toward a millennial upwelling of fusion, working intently with electronic textures and mechanized rhythms. His aims were ultramodern, and his execution on a pair of impetuous Blue Note albums, his last for that label earned some acclaim. But Mr. Hagans might have begun to feel that he was painting himself into a corner. He now works mainly in an acoustic postbop mode, seeking a similar air of progressivism, but with a subtler, less frenetic feel.

His current quintet could hardly be better suited to the task. It features a pair of advanced harmonic colorists, the guitarist John Abercrombie and the pianist Marc Copland, who share an affinity for softly luminescent chords. The bassist Drew Gress and the drummer Bill Stewart, who have worked often with Mr. Copland, round out the rhythm section. Mr. Hagans enlisted more or less the same crew for his two most recent albums, on the German label Pirouet: Alone Together (2008) and Beautiful Lily (2005).

Beautiful Lily, the title track of one of those albums, imbued the performance with its only dose of vulnerability. The songs shadowy melody would have been better served by an open horn, as on the album, than by a Harmon mute, which inexorably evoked Miles Davis. But Mr. Hagans played it with admirably solemn concentration before yielding the floor to Mr. Abercrombie, whose solo was a model of coherent flow, and Mr. Copland, who made a concise statement feel capacious and open-ended.