Tim Garland at Catalina's in LA on Monday, June 29th

SOURCE: ALL ABOUT JAZZ PUBLICITY
June 26, 2009
Sign in to view read count 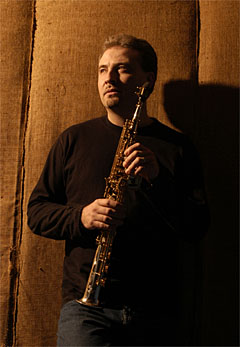 Tim Garland is widely known as one of the UKs most successful musical exports working in jazz. He first made international waves playing saxophone, bass clarinet and flute with Chick Corea, and has also toured and recorded extensively with vibes player Joe Locke and drum legend Bill Bruford. He has orchestrated five of Chick's best loved pieces for the Grammy Award winning >The New Crystal Silence album --described by Pat Metheny as “magnificent and creative arrangements". The Lighthouse Trio features award-winning pianist Gwilym Simcock, described by Chick Corea as “...an original--a creative genius", and the incredible Israeli percussionist, Asaf Sirkis. They will be performing music from Tims new album Libra (Global Mix).

CELEBRATING THE DOUBLE CD RELEASE BY THE LIGHTHOUSE TRIO OF “LIBRA"

“This exemplary 2 CD set is one of the finest achievements in British Jazz." --Stuart Nicholson, Jazzwise ****

“Libra is a triumphant, mercurial album which confirms the status of these players in the frontline of British, and world, jazz -- and offers as much fiery playing as quiet and considered reflection. Wonderful." --Elswhere, New Zealand

Tim is also celebrating the success of his orchestrations on the Chick Corea release of last year. The New Crystal Silence has won Tim a Grammy Award!

Tim Garland is performing in USA as part of the Made in the UK concert series.