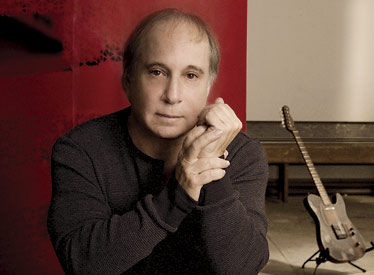 To celebrate the release of his first new record in five years, legendary artist Paul Simon has announced a very special North American tour to include two shows at Merriam Theater, Sat.-Sun., June 4-5. The set list will draw from his iconic career, including several songs that haven't been performed live in many years. Also included will be songs from Simon's recently released album, So Beautiful or So What.

Tickets go on sale this Friday, April 29 at 10am and are available online at kimmelcenter.org, by calling 215-893-1999, or at the Kimmel Center box office open daily from 10am to 6pm and later on performance evenings. (Additional fees will apply.)

Produced by Phil Ramone and Paul Simon, with liner notes written by Elvis Costello, So Beautiful or So What is one of the most highly acclaimed albums of the year. Rolling Stone recently declared it, “His best since Graceland," and National Public Radio affirmed, ..."his new music balances great poetry and pop. Paul Simon is a national treasure." Filter Magazine calls the new album, ..."a new masterpiece from the Picasso of music."

To hear two new tracks from So Beautiful or So What please visit: www.paulsimon.com

Tickets will go on sale on Friday, April 29 at 12 noon and are available online at kimmelcenter.org, by calling 215-893-1999, or at the Kimmel Center box office open daily from 10am to 6pm and later on performance evenings. (Additional fees will apply.)

On April 12, 2011, Rounder Records released the eagerly anticipated Alison Krauss and Union Station album, Paper Airplane. The album debuted at No. 1 on the Billboard Country Albums Chart, Bluegrass Albums Chart and #3 on the Top 200 Album Chart. A truly breathtaking collection of 11 exquisite songs, Paper Airplane is Krauss' 14th album and the band's follow-up to 2004's triple Grammy® winning Lonely Runs Both Ways (Rounder). It is Krauss' first release since her 2007 internationally acclaimed, multi-platinum collaboration with Robert Plant, Raising Sand, which won six Grammys including “Record Of The Year" and “Album Of The Year."

Part of Alison Krauss' incontestable talent is how effortlessly she bridges the gap between roots music and country, rock and pop. A highly sought-after collaborator, Krauss has worked with some of the biggest names in popular music, including James Taylor, Phish, Dolly Parton, Yo-Yo Ma & Bonnie Raitt. Since signing with Rounder Records at the age of 14 in 1985 Krauss has sold in excess of 12 million albums and garnered 26 Grammy® Awards, the most for any female and the third most of any recording artist in Grammy® history. Her breathtaking live performances should not be missed.

Kimmel Center, Inc., a charitable, not-for-profit organization, owns, manages, supports and maintains The Kimmel Center for the Performing Arts, which includes Verizon Hall, Perelman Theater, Innovation Studio and the Merck Arts Education Center. Kimmel Center, Inc. also manages the Academy of Music, owned by the Philadelphia Orchestra Association, and the University of the Arts' Merriam Theater. Our mission is to operate a world-class performing arts center that engages and serves a broad audience from throughout the Greater Philadelphia region.