Tickets Moving Fast For May 14 Memorial Concert For Phil Woods In Pittsfield, Mass.

Woods introduced 14-year-old saxophone prodigy Grace Kelly to Berkshires audiences in 2006, when he invited her to the stage, for a moment that has become part of jazz lore. While they were trading choruses on “I’ll Remember April,” Woods removed his trademark leather cap and placed it on her head, an iconic passing-the-torch moment. 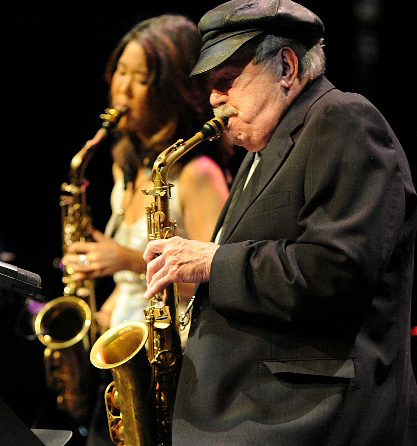 Berkshires Jazz, Inc. has announced that tickets are on sale, and moving briskly, for the May 14 memorial concert in honor of the late alto saxophonist Phil Woods. To take place at Barrington Stage, in Pittsfield, Mass., the tribute will be performed by a gathering of the NEA Jazz Master’s quintet, with Brian Lynch (trumpet), Bill Mays (piano), Steve Gilmore (bass) and Bill Goodwin (drums), along with Woods’ protégé Grace Kelly on alto saxophone.

A native of Springfield, Massachusetts, Woods’ career spanned more than 65 years. He performed as a leader or guest artist with the royalty of jazz, from Charlie Barnet to Dizzy Gillespie, Buddy Rich to Quincy Jones, plus wide-ranging leaders like Michel Legrand, among others. He was also heard on a variety of recordings with popular artists like Paul Simon and Billy Joel. He was the recipient of four Grammy awards, and in 2007 was named a Jazz Master by the National Endowment for the Arts. He died on Sept. 29, 2015 at the age of 83.

Woods introduced the 14-year-old saxophone prodigy Grace Kelly to Berkshires audiences at the second annual Pittsfield CityJazz Festival in 2006, when he was guest soloist with the U.S. Army Jazz Ambassadors big band. Having mentored Kelly at a jazz workshop, Woods invited her to the stage, an event that has become part of jazz lore. In a moment that has become part of jazz lore, Woods removed his trademark leather cap from his head, placed it on hers, an iconic passing-the-torch moment. The clip has had nearly 150,000 views on YouTube.

The moment gave rise to a Grace Kelly composition and recording, “Man With the Hat,” on which Woods appeared as guest soloist. The May 14 gathering in Pittsfield will be the first reassembly of his legendary quintet with Kelly in the alto chair. The concert will take place at the Boyd-Quinson main stage at Barrington Stage Co., and is sponsored in part by a grant from North Coast Brewing Co., which supports ‘live’ jazz events nationwide.

In addition to Kelly on saxophone, the band includes:

Bill Goodwin, an almost completely self-taught drummer who attributes his early interest in the drums to Shelly Manne's playing on the movie soundtrack of “The Man with the Golden Arm.” In addition to serving as drummer for the Phil Woods ensemble, Goodwin is a renowned recording executive, having produced Phil Woods’ recordings since 1980, including: Grammy Award winning albums “More Live” and “At The Vanguard", 1992 Grammy nominee “All Bird's Children", and “Dizzy Gillespie Meets the Phil Woods Quintet”. Goodwin appeared at the 2011 Pittsfield CityJazz Festival with Kelly and Woods on their “Man With The Hat” tour.

Steve Gilmore, who made his home in the Poconos in 1971, where he became associated with drummer Bill Goodwin. Together they formed the rhythm team for several bands including The Chamber Jazz Quintet, Al Cohn and Zoot Sims, Tom Waits, Mose Allison and The National Jazz Ensemble. In February, 1974 Gilmore and Goodwin both joined The Phil Woods Quartet at its inception, and they anchored the quartet (and later quintet) for its duration. With three Grammy awards under his belt, Gilmore frequently appears at Dizzy’s Coca-Cola Lounge in New York City.

Trumpeter Brian Lynch, who also leads his own quintet as well as touring with Latin Master Eddie Palmieri and the special memorial edition of the Jazz Messengers. The Grammy winner is a graduate of two of the jazz world’s most distinguished ensembles, Art Blakey and the Jazz Messengers and the Horace Silver Quintet. As a bandleader and recording artist, Lynch has released 19 CDs featuring his distinctive playing, composing and arranging.

Pianist Bill Mays, who spent two decades as a mainstay on the southern California jazz scene, before relocaing to New York in 1984. He is noted as a first-rate leader, accompanist, and soloist, and is well-known for his compositional and arranging talents. He has contributed music to the libraries of a wide array of artists, from chamber ensembles to full orchestras and big bands, as well as to Phil Woods. He tours and records in many varied configurations, and has appeared in Pittsfield as a solo performer.

Ticket information and other details are available at BerkshiresJazz.org or 413-236-8888.

Berkshires Jazz, Inc. is a 501c3 non-profit organization whose twofold mission is to present jazz events and encourage jazz education in Berkshire Count. Its year-round programming is highlighted by the Pittsfield CityJazz Festival, spanning 10 days in mid-October. The longest-standing jazz festival in the Berkshires, the Pittsfield CityJazz Festival is a signature cultural event of the fall foliage season in western Massachusetts and the Albany, New York region.