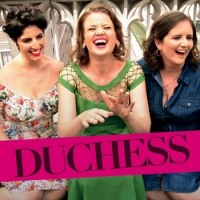 The new jazz vocal trio - whose first album arrives from Anzic Records on Feb. 17, 2015 - bottles an irresistibly fizzing style, inspired by the pioneering harmonies of the Boswell Sisters

Sure-footed swing, sweet-toned harmony and ever-insouciant charm are embodied in the new jazz vocal trio Duchess, featuring notable New York singers Amy Cervini, Hilary Gardner and Melissa Stylianou. The group's debut album - Duchess, to be released by Anzic Records on Febuary 17, 2015—channels the 1930s inspiration of the virtuosic Boswell Sisters into a wonderfully entertaining and contemporary package. Produced by Oded Lev-Ari, who helmed previous acclaimed Anzic releases by Cervini and Stylianou, Duchess pairs the vocal trio with an ace New York band: pianist Michael Cabe, bassist Paul Sikivie and drummer Matt Wilson, plus saxophonist Jeff Lederer and guitarist Jesse Lewis. The songs of Duchess range from the Peggy Lee number “I Love Being Here With You" and Johnny Mercer's “P.S. I Love You" to new twists on “Que Sera, Sera" and the indelible standard “I'll Be Seeing You." There's a playful Gershwin rarity with “Blah, Blah, Blah" and a direct Boswell Sisters homage with their arrangement of “Heebie Jeebies." And there are solo spots for each of the Duchess ladies with “My Brooklyn Love Song" (Hilary), “A Doodlin' Song" (Amy) and “Humming to Myself" (Melissa). A blend of the vintage and the fresh, Duchess is a fizzing cocktail of an album.

Duchess - backed by the same band as on the album - will perform an album-release show at New York City's Jazz Standard on March 3, 2015. The group promises “three good-time gals singing together in harmony," Hilary says. “There's a big wink in what we do, a mix of levity and sincerity." Amy had sung previously many times with Hilary and Melissa, separately. It was the suggestion of Amy's husband - producer-arranger Oded Lev-Ari - to convene a threesome at one of her regular nights at the 55 Bar in the West Village, as he envisioned the trio sound in his head. Amy says: “We sang old Boswell Sisters and Andrew Sisters charts, and it went so well that Oded was inspired to write custom arrangements for us. He has a voice in this group, so much so that it's almost a quartet."

About the magical rapport among the three singers, Amy says: “The chemistry with the three of us was special from the beginning - the sort of chemistry you can't predict and that doesn't happen very often. Honestly, the audience response had a lot to do with us pursuing the group. People were having such a good time, bobbing their heads and bopping in their seats. As Hilary said, Duchess is all about combining swinging with fun. There can be a fine line between entertaining and schtick, but we take care to fall on the right side of that. It's serious fun, in that we take the music seriously but not ourselves."

The historic muses for the Duchess sound are the Boswell Sisters, a trio from New Orleans whose pioneering close-harmony records for Brunswick in the Thirties are a prize in the jazz canon. “The Boswell Sisters were such originals," Hilary explains. “This kind of music got more conservative a decade later in the 1940s, with the Andrew Sisters taking the vocal trio format more mainstream, even though they were swinging and super-tight in their own way. But the Boswell Sisters had a kind of instrumental approach to harmony singing, and there was a wildness to what they did, with abrupt tempo changes, crazy harmonies and ensemble scatting as if they were singing from one brain. We love them. That said, we're not doing re-creations at all. Our voices, personalities and 21st-century sensibilities help impart individuality to what we're doing. We're making these songs our own, naturally. Oded's arrangements are tailored to our singing, and what Jeff Lederer plays isn't something that you'd hear on a Boswell Sisters record. It sounds like now."

Along with their craft-honing, crowd-pleasing New York shows at the 55 Bar (including a three-month residency) and the Jazz Standard (joining in with Matt Wilson's Christmas Tree-O), Duchess brought the house down in New Orleans, native ground for the Boswell Sisters sound. The group was invited to the Crescent City to participate in a celebration of the Boswell Sisters by Kyla Titus, a granddaughter of one of the sisters and who runs an association for preserving their music. Melissa recalls: “Groups specializing in Boswell Sisters material from all over the world went down for the event. It was amazing how well they could do the Boswell Sisters music note-for-note. We only do a handful of numbers from the Boswell Sisters repertoire - we're more inspired by the spirit than the letter. But when we sang at Snug Harbor down there, people were so into it. I think they appreciated this tongue-in-cheek, slightly down-and-dirty thing we have going on."

Aside from the original Boswell Sisters chart for “Heebie Jeebies," producer Oded Lev-Ari arranged the songs on Duchess. As Hilary pointed out, the goal was never just a re-enactment of something ultra-hip from the Thirties. “That would be a museum piece, and that isn't what we wanted to create," Oded says. “But there is this playful correspondence with history of the music and the sound of the Boswell Sisters and others. Some of my arrangements for the group are informed by the old-school sound, with parallel movement for the voices, melody in the middle, triad-like structures like in 'A Little Jive' and 'It's a Man.' When I write, I usually try to make very singable melodic lines for musicians to play, and singers are no exception. There is a tradition in big-band composition - particularly with Duke Ellington - that emphasizes writing for the individual playing the instrument, not necessarily for the instrument itself. And getting to know the trio's voices and colors allowed me to do that. It has been a ton of fun. At this point, I can hear what a specific note would sound like when Melissa sings it versus Amy or Hilary, and it makes it possible to really refine the sound and expression."

As for the band, all-star drummer Matt Wilson is a longtime Amy associate, as is pianist Michael Cabe, who played on her first two solo albums. Guitarist Jesse Lewis plays alongside Amy in their trio Jazz Country. And saxophonist Jeff Lederer and bassist Paul Sikivie are members of Wilson's Christmas Tree-O. Amy sums them up: “The band is just so good. They're really essential to our musical vibe and the humor, too, the way they play off each other and us."

Melissa shares a story about one of the best responses to the Duchess sound and sensibility: “It was from a musician, a vibes player who had a set after us at the 55 Bar. He came up to us and said, 'You know, the audience doesn't realize how difficult what you're doing really is. They're having too good of a time'."