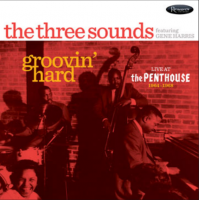 slideshow
In the early 1960s, a growing number of lounges and clubs geared to young adults began emerging in Chicago. Some clubs such as the Playboy Club, which first opened in Chicago in 1960, pulled in white customers, while plenty of others were aimed at African-American audiences. All of these establishments began featuring jazz-soul trios, offering a sophisticated, chill alternative to pop and the discotheque phenomenon. The soul-jazz trio concept became so popular in Chicago and on LP that it soon spread throughout the country, from San Diego to Boston and Miami to Seattle.

Unlike the white, straight-up jazz trios of the period, the jazz-soul groups tended to be funkier and earthier, with a deep connection to R&B. Among the pianists who led soul-jazz trios in the 1960s were Ramsey Lewis, Ray Bryant, Bobby Timmons, Les McCann, Mose Allison, Junior Mance, the Young-Holt Trio, Harold Mabern and Wynton Kelly.

One of the most successful of all the jazz-soul trios was the Three Sounds. The group first featured pianist Gene Harris, bassist Andrew Simpkins and drummer Bill Dowdy, with Kalil Madi and Carl Burnett on drums in later years. Harris combined the dramatic, bluesy piano of Red Garland, the delicate swing of Ahmad Jamal, the cyclonic attack of Oscar Peterson and the soul-gospel feel of Ray Charles. The result was a wildly successful run for the Three Sounds from 1956 to 1973, during which they toured nationally and recorded extensively for Blue Note.

Now there's an addition to the Three Sounds' discography. Resonance Records has just released The Three Sounds: Groovin' Hard, a live album of 10 tracks taped at Seattle's Penthouse between 1964 and 1968. The recordings were made by Jim Wilke during his weekly radio show called Jazz from the Penthouse, a club that ironically was on ground floor of the city's Kenneth Hotel. I'll let Zev Feldman, who co-produced the new release with George Klabin, pick it up from here...

“From February 1962 to August 1968, Jim (above) hosted the weekly radio program, Jazz From the Penthouse, on Seattle's KING-FM. As a well-known radio personality in the Northwest, Jim developed a working relationship with Seattle's legendary jazz club, the Penthouse, and consequently was able to air live performances by a wide array of artists while they performed at the club. These performances were broadcast direct to the public, right as they happened. The shows not only went on the air live, Jim taped them, employing professional recording techniques and requirement. Over the years, Jim amassed an impressive collection of high-quality tapes.... Among the recordings in Jim's archive that first captured George Klabin's attention was this group of performances made during four separate engagements over the course of five years by three different editions of the Three Sounds.... All of us at Renaissance are gratified to be able to present these recordings in conjunction with Jim and the family of Charlie Puzzo Sr., who founded and owned the Penthouse."

As for the musicians, here's what Zev told me...

“We also always pay artists (leaders and sidemen) and make efforts to reach the musicians. There are occasions where we can't find someone but we make our best efforts. I will say that if we hadn't been able to do a deal with Gene's Harris's estate, this album never would have happened."

The music on this release is refreshing, solid, soulful and elegant. The year has just begun, but this is the best historic issue thus far.