Aaron Graves then invited all the musicians in the sanctuary to come up and jam on Fambrough's tune "Little Man." And they did--in droves. 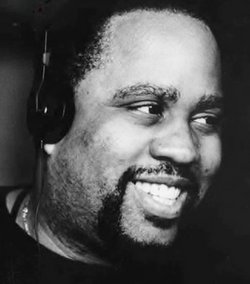 The secret is out now. Like St. Peter's in New York City, the Lutheran Church of the Holy Communion at 2110 Chestnut Street in Philadelphia is fast becoming this city's “jazz church" with a potent jazz ministry. Drummer Ed Dennis, who runs jazz vespers there, and pastors Reverends Kari Hart and Stephen Kaiser know how to throw a great send off—this time for the late bassist Charles Fambrough.

Yesterday's funeral service was a picture-perfect celebration of the man as a musician, a father, a husband, a friend, and a teacher. As the large crowd filed into the 19th century, Romanesque-style church with its expansive stained glass windows and rich wooden pews, a jazz band was front and center playing. Pianist Aaron Graves, bassist Lee Smith, drummer Leon Jordan Jr., percussionist Omar Hill, along with tenor saxophonist Greg Reily and trumpeter Leon Jordan Jr.. set the mood. Later, soprano saxophonist Joe Ford, who worked with Fambrough in McCoy Tyner's band, and singer Pearl Williams, who gave “Broski" (a name Fambrough acquired during his time with Art Blakey and the Jazz Messengers) his first job, joined together to play “There Will Never Be Another You." Other musicians and singers alternately played and sang as the mourners settled themselves in to contemplate the life of the musician they had come to celebrate.

Reverends Kari Hart and Stephen Keiser, two people who have made diversity in their church a cornerstone of their ministry, made the congregation comfortable with their Thanksgiving for Baptism and Reverend Hart's expressive reading of chapter 13 of St. Paul's famous first letter to the Corinthians about the nature of love. That reading set the tempo for the rest of the service as Charles Fambrough's music filled the sanctuary played by Aaron Graves, bassist Buster Williams, drummer Lenny White and Joe Ford on a haunting “Bright Eyes," a song Fambrough had written for his youngest child, Andrea. Later, they would play “Dolores Carla Maria" with Omar Hill on percussion, a song Fambrough wrote for his beloved wife Dolores and two of her daughters, Carla and Maria.

Aaron Graves, the de facto emcee of the service, said, “Above all, Charles' music was inspired by his family and friends," and he invited anyone sitting in the pews to come up and give testimony. And indeed they came. Bassist Stanley Clarke, singer Pearl Williams, drummer Lenny White, Chappy Washington, pianist Bill O'Connell, drummers Justin Faulkner and Webb Thomas, pianist Mark Kramer, Henrietta Shelton (director of the Chicken Bone Beach concerts in Atlantic City), a few students, and many family members stepped up to the microphone to give a full measure of the man.

Stanley Clarke reminisced about meeting Fambrough when they were 15 years old and how, right up to the end of Fambrough's life, they were still talking about “basses, bows, and wood for hours." Pearl Williams had everyone laughing about the bassist showing up for his first New Year's Eve gig in “dungarees." Chappy Washington revealed how he and Fambrough would play hooky from school to play music at “Mrs. Fambrough's house" while she was at work, calling all their young musician friends from West Philly High School to play hooky too. Lenny White weighed in after many previous, humorous comments about Fambrough's days with McCoy Tyner, saying how playing with McCoy “messed everybody up," and Omar Hill stated that “Three days of the week I liked him [Fambrough], but now that he's gone, I don't know who I'm gonna hang out with"; again making the crowd laugh through their tears. Justin Faulkner, who was mentored by Fambrough, told of the impact the man had on his own development as a musician: “That man had so much information in his head."

Probably the most touching testimony came from his daughter Carla who told a story about her dad coming home from being on tour with some very special presents—super soakers! Carla said the kids expected to fill the soakers and take the game outside, but their fun-loving father started the water fight right in the living room and the aqueous free-for-all began in earnest, much to the chagrin of Dolores, who saw the dripping carnage after the fun.

Finally, after the long line of family and friends' recollections and an incredible, impromptu rendition of “The Lord's Prayer" sung by R&B vocalist Bunny Sigler ended, Dolores Fambrough thanked everyone for being a part of her husband's life. This woman, who had struggled mightily for the past few years to help her husband overcome his daunting physical problems, was like a rock, even at that moment, and everyone who had known Charles Fambrough knew how Dolores' strength of heart had carried him through until the end of his life.

Aaron Graves then invited all the musicians in the sanctuary to come up and jam on Fambrough's tune “Little Man." And they did—in droves. Too many to mention here. As the musicians filed to the front of the sanctuary and the tune began, the crowd stood up for the traditional jazz mingle ritual. The rest of the program (including the sermon!) was forgotten in the spirit of good will that spontaneously erupted in the sanctuary. This was pure jazz on a city scale—generated by the love of the folks in the room for Charles Fambrough&#151and improvisation worth the magnitude of the loss everyone felt.