SOURCE: ALL ABOUT JAZZ PUBLICITY
March 30, 2013
Sign in to view read count 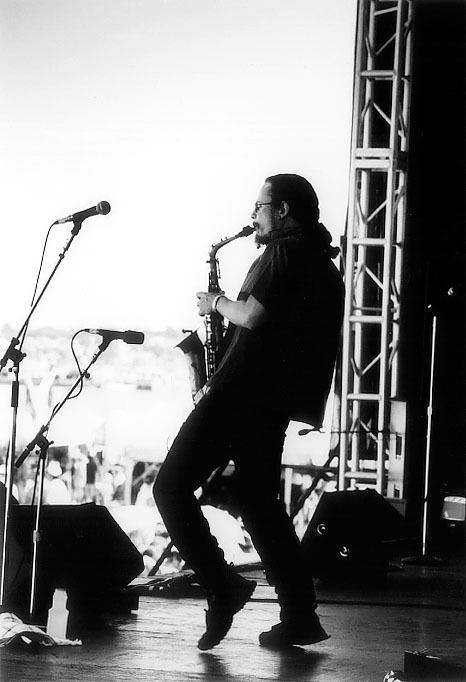 Castillo's 90-minute documentary film, budgeted at around $300,000 for its production alone, and slated for a 2014 finish, will unfold the life of the late Thomas Chapin, a jazz master who emerged in the 1980's in New York City's wild and free downtown music scene with a highly original style. After 20 years of a soaring career and 12 CDs, most under the Knitting Factory label, Chapin passed away in 1998 at age 40, following a yearlong bout with leukemia.

Chapin was considered a virtuoso by jazz writers who followed him. He was described as having “monstrous chops" and “full of incredible energy, pushing the needle, never letting up." Critics said he was “moving the music forward." A vanguard in the world of “free" jazz, Chapin embraced all expressions of music. Most notably, he moved easily between the avant-garde and straight-ahead jazz communities; jazz festival promoter John Phillips called him an enormous bridge. Jazz writer Larry Blumenfeld noted: “Chapin is commonly pointed to as one who helped the downtown scene connect with a larger audience and is credited by some as lending a more experimental edge to jazz’s mainstream."

Castillo, who lives in Hawaii and New York City, is making her 10th documentary and her fourth biography. She has been making documentaries since 1988. Her first documentary, SIMPLE COURAGE: AN HISTORICAL PORTRAIT FOR THE AGE OF AIDS, which aired on PBS, won an EMMY in 1993. Her other film biographies include AN UNCOMMON KINDNESS, the story of St. Damien who worked among Hawaii's leprosy victims in the late 1900's and STRANGE LAND, the story of her mother's coming to America as a World War II war bride from the Philippines.

Chapin was Castillo's friend and her sister Terri Castillo Chapin's husband. “I knew I wanted to make this film when I saw Thomas's obituary in the New York Times and heard music tributes were being played on Boston NPR and on other jazz stations.

“Thomas's story and his remarkable but short career has never been fully told, although he is included in the major encyclopedias of jazz," she says. “I don't know that much about jazz or Thomas as a player, for that matter, so when I began researching him, I asked people who knew him, played with him and wrote about him, 'Should a film about Thomas Chapin be made?' They all emphatically said, 'Yes. Absolutely.' And then I said, 'Tell me why.' What they told me compelled me to want to create this film."

Straight out of college, and thanks to the recommendation of his mentor and educator at Rutgers University, jazz master Paul Jeffrey, Chapin went on to tour with Lionel Hampton as his lead alto sax and musical director. This was followed by a two-year stint as saxophonist with the legendary drummer Chico Hamilton, before forming his own Thomas Chapin Trio, which had a long, eight-year stint (1989 to 1997), playing all over the world. His following in Europe grew as the Knitting Factory jazz tours and George Wein's Festival Productions put the Thomas Chapin Trio and staged concerts for thousands.

MORE ABOUT THE FILM

The film, says Castillo, also will show the competitive environment that Chapin thrived in with his Trio as he came to play on the big jazz stages of the world, including a milestone performance at the 1995 Newport Jazz Festival, which was later broadcast on PBS. The ever-elusive reach for wider recognition was profoundly explained, says Castillo, by Chapin's friend, colleague and bassist, Mario Pavone: “As Thomas told me, the plane was just gaining altitude." Castillo added, “Thomas had some other big challenges. The film will also explore how Thomas had a childhood heart condition that was active and ever-present throughout his performing life, how he overcame his personal struggle with alcohol and the hard- won battle to gain his parents' approval for a career that went against their conservative New England traditions and expectations.

“Music will fill the screen in this film," says the filmmaker, “because Thomas was music, and music was Thomas. When the illness took its toll, his greater pain was living without the strength to play as he had done every day of his life. But 12 days before he passed, as my film will show, there would come one last triumphant moment — the culmination of a life lived to its fullest, through music. He said it was his first love."

Castillo notes, “It's been 15 years since his passing. I want to tell his story before it is too late, before memories of him fade, and before an important piece of history is lost. I love telling stories about people who stand out, who contribute something enduring to our society, who took the way of 'the road less traveled' and took it, and left their unforgettable mark. Clearly, Thomas was totally unique, an iconoclast who followed his own musical path. I feel it's time to tell his story."

Castillo's idea to use Kickstarter, an online fundraising site commonly used by artists for films and other creative projects, makes sense, she said. “It’s a new tool in this age of of social media and instant communication and a lot of artists, including filmmakers are skipping the long, tiresome road of writing grants as our only way to fund our films. Kickstarter's a great way to fund ambitious dreams, if you can harness it," says Castillo. “It's called 'crowd funding,’ where you gather 'your people', your 'crowd,' and even reach out far beyond them to, in my case, a global community of jazz lovers, to get them all to back you. This didn't exist several ago when I made my last film."

Castillo has had attractive banner ads designed to promote her Kickstarter campaign online on prominent jazz websites — including downbeat.com, allaboutjazz.com, jazzcorner.com, and on jazzwax.com, the award-winning blog written by jazz writer Marc Meyers — as part of her social networking strategy to reach out to the jazz community around the world. She says other jazz bloggers will be sending out announcements to thousands in support of her film. For the past year, she also has been harnessing social media tools — Twitter, LinkedIn, Facebook, YouTube — after creating the film's website, which has attracted more than 5,000 visitors.

“Thomas Chapin had fans all over the world, because he played on the big stages of jazz first with Lionel Hampton and then with his own Thomas Chapin Trio," says Castillo. “There is great potential to gain a surge of international backers for the film at Kickstarter. I have no idea how far my reach will be. We shall see. Through social networking, I am already connected to folks in Japan, Spain, Italy, Belgium, Switzerland, Norway, Germany, France, and who knows where else!" This former newspaper journalist is utilizing her Executive MBA know-how that taught her to be an entrepreneur and to “think outside the box."

With success at Kickstarter, when her 45-day campaign ends on March 31st, Castillo will begin crafting a shooting script with a New York film editor and will begin planning a five to six week shooting period. The primary locations for the shoots will include New York City, the home-base where Chapin lived and played the uptown and downtown scenes for all of his jazz career; the Hartford, Conn. area where Chapin was from and where he continuously visited, joining local musician friends at major jazz clubs; Massachusetts at Phillips Academy Andover, where Chapin attended high school and was introduced to jazz, setting him on his career path in music; and New Jersey's Rutgers University where Chapin completed his jazz studies with mentor and saxophone master Paul Jeffrey.

Because Kickstarter is an all or nothing deal — projects must be fully funded at their stated goal or no money will change hands— Castillo is anticipating no let-up in her social networking efforts to reach as many backers as possible. “It's like shooting in the dark, but I feel confident the film project has created some amazing synergy, magic and lots of good will out there," she says.

“Most of all, the greatest impetus to do this film comes from Thomas himself who touched so many with his music and playing and good will," says Castillo. “He was described by international saxophonist, John Zorn, as 'the real deal.' His big warm-hearted, down-to-earth personality embraced everyone. I'm hoping his film will be embraced by all."