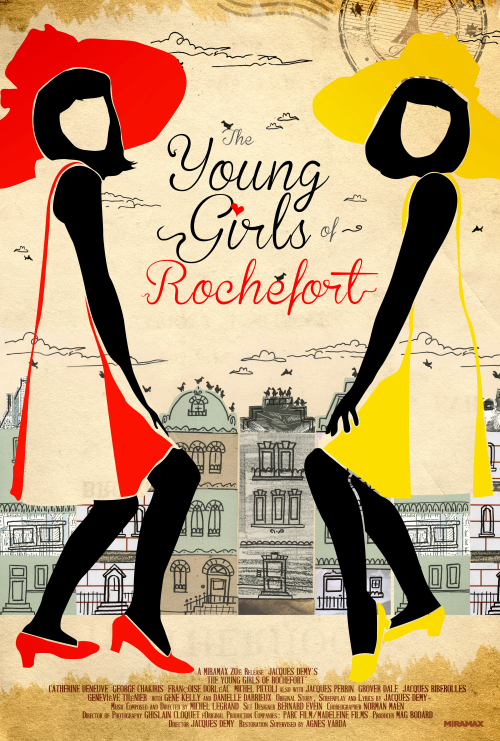 One of my favorite movies is The Young Girls of Rochefort (1967), written and directed by Jacques Demy with music by Michel Legrand. I love the film more than Umbrellas of Cherbourg (1964), which also was directed by Demy with music by Legrand. It's overwhelmingly uplifting a with sensational score and explosive color. France in the '60s was magical. The music in Rochefort is more glorious and spectacular that Umbrellas, the modern-dance choreography is marvelous and the pastel colors are so powerfully seductive, it's like opening a box of French marshmallows.

If you also have a thing for Rochefort or you've never seen the film before, do yourself a favor and buy the DVD or Blu-Ray release that came out in 2017. The extras include a French television interview from 1966 featuring Demy and Legrand discussing the music for the film; a conversation from 2014 between Demy biographer Jean-Pierre Berthomé and costume designer Jacqueline Moreau; the trailer; an illuminating Behind the Screen documentary about the making of the film; and a documentary from 1993 directed by Agnès Varda called The Young Girls Turn 25, a fascinating look back at the summer of '66 when time stood still in a town overrun by filmmakers, actors and dancers and painters who turned the buildings and streets into a colorful set. There's also an essay by film critic Jonathan Rosenbaum.

In summary, The Young Girls of Rochefort is about an entertainment troupe that arrives in the French coastal town of Rochefort in the summer of 1966 and the love stories that transpire. The film stars Catherine Deneuve and her older sister, Françoise Dorléac. They are an absolutely delight together. You can't take your eyes off of them. Also in the film is George Chakiris and Gene Kelly.

The film is made even more poignant given the tragic event that occurred soon after it came out. Three months following the film's release, Dorléac was racing to catch a plane in Nice when her Renault 10 hit a signpost and flipped over. The car burst into flames before she could escape or be saved. A terrible end to an emerging career and a painful loss to Deneuve.

But before the pain, the overwhelming joy of Rochefort. Here are a bunch of clips:

Here's one of the film's early scenes, with Deneuve in the pink hat and Dorléac in yellow...

Here's part of the grueling rehearsal for the dance-studio scene weeks earlier in London...

And here's another wonderful scene with terrific music by Legrand...

Here's Legrand's Chanson de Maxence (which would become You Must Believe in Spring once Marilyn and Alan Bergman wrote English lyrics)...

Here's the opening credits to give you a feel of the dance sequences...

Here's Michel Legrand's unmistakable piano backed by an orchestra performing a medley of the film's songs. The sync is a little off, since Legrand begins conducting from the piano and the piano continues...