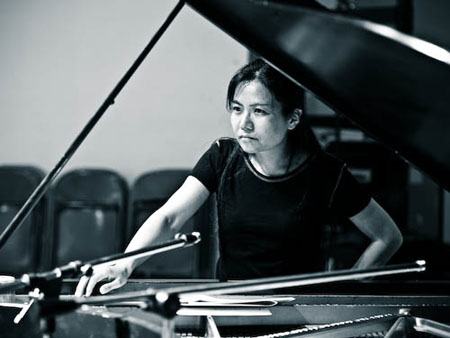 Since starting up this site about four years ago, we've taken a look at a Japanese whack jazzer only once, but the fact of the matter is, the Land of the Rising Sun is a haven for music that's unconventional, unpredictable and thriving on the edge. For this post, we'll make up for lost time, and we only have to fix our gaze at just one artist: Satoko Fujii.

Satoko Fujii is a relative newcomer to the scene, having made records on her own or co-led with others since the 1990's, but she already boasts more than fifty albums led or co-led. The reason for her productivity is because, simply put, she has so much musical to say. The Berklee School of Music grad is a pianist, composer and bandleader on the grandest of scales. She leads full orchestras (that's right, I mean in the plural), quartets, duets, solo piano and everything in-between. She writes elaborate, mind-boggling scored music, but can create music on the spot that makes sense. She zig zags across artificial musical boundaries like they never existed: 20th century classical, folk, jazz, noise rock and modern creative are common ingredients in her mix, but after a while, you're not surprised to find any strain of any genre pop up on her songs.

With all these kinds of attributes, it might be tempting to call her the Carla Bley of Eastern Asia, which in my book is a high compliment. In truth, she might only occasionally sound like Bley, but she matches Bley in ambition and range.

Since evaluating Fujii's wide, deep and thick discography would fill up a 2-inch book, I'm going to examine only her releases since last fall in this small space. That's still an ambitious undertaking, because there's five of them that have been released during that time. Sort of. Only Two of them have been issued solely under her name; one is a duet and two more are in small combos led by her husband, trumpeter Natsuki Tamura. Four of these records, by the way, were released on the same day. How do you like that kind of productivity?

For the expansive, double-CD Kuroi Kawa~Black River released last October 27, Fujii pairs up with avant garde violin player Carla Kihnlstedt for a set of both sutdio and live improvisational pieces under their colelctive name, Minamo. The prior, self-title debut from a couple of years earlier consisted entirely of live recordings of extended pieces. Disc 2 follows the same format, but for Disc 1, the two decided to change out their approach with short, concise pieces ranging in running times from 34 seconds to around six minutes long, with most of the 18 improvised performances running between one and three minutes.

No matter the format, the main appeal of this duo is their remarkable ability to conjure up remarkable, strange timbres and play together as if they were dwelling inside each other's minds. Though some tracks sound almost like composed modern classical, it was all made up on the spot, and each play their instruments in every which way possible (Fujii even playing inside her piano a time or two). The live, long instant compositions take listeners on journeys with surprises lurking on every corner, while the shorter, studio tracks create exotic, concise statements out of thin air. With only a violin and piano playing, thre's a lot of air in their sound, but the use that space effectively to create suspense, tension and meditation. The note-perfect rapport can only come from world-class musicians such as these two.

They say “you can't make this stuff up" but that's exactly what Fujii and Kihlstedt did. Instantaneously, in fact.

This is the first of four CD's surveyed here that was part of a foursome released by the Libra Records on March 23. “First Meeting" is the name of the Natsuki Tamura-led quintet that includes Fujii on piano, Kelly Churko on guitar and Tatsuhisa Yamamoto on drums. The four take on five Tamura compositions that are highly fragmented experiments in alien intonations: Tamura wails, snarls and blurts, Churko scratches and skitters, Fujii alternately rains down scary notes and makes chime noises. Yamamoto uses seemingly every piece of object near him to rattle on. The composite sound confronts preconceptions about what music is and using these musicians' advanced artistry to work off of base instincts.

Though the music seems randomized, they unfold quite naturally: “Headwaters, for instance, evolves from complete cacophony to peaceful, tuneful moods. “Kaleidoscopic" leave no tonal stone unturned during its twenty-four minute ride. For some forward-thinking artists, taking chances is part of their overall musical approach. For First Meeting, taking chances is the overall approach. And on Cut The Rope, they manage to land on their feet every time.

Gato Libre is another combo led by Tamura. Like First Meeting, it's a quintet, and includes his wife Fujii. But right there, the similarities end. Fujii does not play piano on this set at all, she plays accordion instead. The other distinction is that the music is more solemn, and possesses a Spanish flavor; Tamura's gently probing horn accompanied by Kazuhiko Tsumura's acoustic guitar do much to create this mood. Norikatsu Koreyasu rounds out this ensemble with his acoustic bass. The lack of percussion and, in some cases, formal timekeeping, enables the group to keep the music suspended and craft moods that are more reflective and, yes, romantic.

Fujii's accordion provides fine accompaniment, but Tamura's compositions and his lead horn form the centerpiece of this album. He weaves melodies that retain a classic majesty even when they are stark, and within this mellow setting, he nevertheless inserts ideas that grab your attention (like the clapping between phrases on “Memory Of Journey," for instance). Shiro is Latin-flavored avant garde jazz that soothes, not confronts, and offers a unique melding of differing styles. Tamura proves once again why he has earned a reputation in improvised music circles as a top trumpeter, bandleader and composer.

Finally, we're discussing a proper Satoko Fujii album. The Satoko Fujii Orchestra Tokyo, not to be confused with her New York Orchestra, has been around almost as long. Now a going concern for over a decade, the large band has a full mastery of Fujii's challenging but colorful compositions. Fujii, for her part, finds the right spotlights to the right players within her imaginative arrangements. Most seem to go to Tamura and Churko is often adding the metal crunch that agitates against the stately sound of a dozen horns playing classical charts. Fujii loves to create contrast to achieve communion, and she knows how to use a fifteen-piece orchestra to achieve those ends.

Fujii herself doesn't play any instruments for these eight compositions that she wrote; she only conducts. But it's quite clear to anyone familiar with her work that she is firm control. The ambience is fluid on these songs, even within each song. From the noise-rock/avant-jazz of “Zee" to the unsettling drama of “Zakopane" to the clearly defined, almost sing-song chorus of “Trout," Fujii manages to find ways to leverage the large-ensemble format with new and exciting methods. To return to that Bley reference, it's like she creates a new Escalator On The Hill every time out, and Zakopane is no different in that regard.

This particular release comes from another one of Fujii's ongoing projects, her piano/trumpet/bass/drums quartet “ma-do." As this combo was formed in October of 2007, it's one of her newest endeavors, and Desert Ship is only the second album by this group. According to Fujii herself, the second album has benefited from her composing knowing just how it will sound like with the band this time. That's allowed her to tighten her focus, and mold her music around her players, not so much other way around.

Even where she uses a title she also used for her Tokyo Orchestra ("Desert Ship"), it's fascinating to see how each version differs: Tamura's expressive and emotional trumpet starts off both renditions, which each time is worth the price of admission alone, but the small group lets Tamura linger longer, and Fujii doesn't even begin to state that beautiful, Arabian-flavored melody until midway through the performance, because she understands it wasn't necessary to rush things. But when the rest of the band gets going, they only add to the trumpet's momentum. Other songs can but nearly as abrasive as First Meeting; “Sunset In The Desert," an impressive showcase for drummer Akira Horikoshi, is but one example. “February/Locomotive/February" is a great use of a start/stop melody, propelled by Horikoshi and bassist Norikatsu Koreyasu's eruptive syncopations.

Desert Ship is full of surprises and inventiveness...just like the other four albums mentioned here. Satoko Fujii's wide, wild wonderful world is a pretty neat place to inhabit.