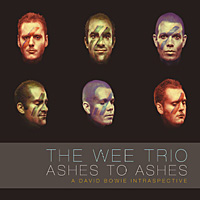 “an investigative vehicle which shakes with energy... inventive jazz which works on its own merits while retaining Bowie's spirit and self- assurance." &#151Audiophile Audition

“Ashes to Ashes suggests that if you wash 30 years of glam off of Bowie, durable songs remain... there's plenty of adventure and invention in these tracks." —OffBeat Magazine