SOURCE: ALL ABOUT JAZZ PUBLICITY
April 23, 2008
Sign in to view read count 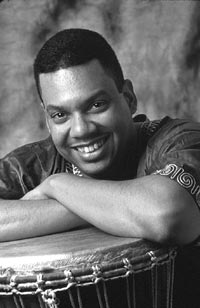 Vincent Ector hails from the musical city of Philadelphia, Pennsylvania where he began his professional music career at the age of nine years old while attending a music magnet school (GAMP) devoted to fostering arts education in children.

Most recently, Vincent produced his second CD as a leader entitled “Renewal of the Spirit" for Mambo Maniacs Records. This recording features Bobby Watson on Saxophones and four of Vincent's original compositions. He is featured performing on drum set, djembe and sangba African drums. His first CD, “Rhythm Master" features the great Eddie Henderson on trumpet. Vincent also produced a tribute recording for the late Charles Earland on the High Note record label. This recording features Joey DeFrancesco, Pat Martino and Eric Alexander. Vincent can also be heard on recordings by: Jimmy Bruno, Onaje Allan Gumbs and Charles Earland, as well as appearing as a guest musician on ABC television's “One Life to Live" daytime soap opera.

An accomplished musician with no confinements, Mr. Ector has been featured as a Clinician at the University of the Arts in Philadelphia, Lincoln University and is currently the President and Executive Director of Arts For Kids Inc., a non-profit arts-in-education company providing workshops performances and professional development for schools in New York, New Jersey and Connecticut. (www.artsforkids.net). He is also a sought after Artist-in-Residence for The Manhattan New Music Project and Arts Horizons Inc. of Englewood, New Jersey. These residencies place him in the New York City public school system, primarily in districts for children with special needs.

Mr. Ector has been an approved NJ State Council on the Arts AIE Teaching Artist since 2002, as well as being the featured teaching artist in the Harcourt/Brace Media Literacy Video Series, which is distributed internationally.