The Tierney Sutton Band Scheduled to Jazz up Worcester in Smooth Style!

SOURCE: MICHAEL RICCI
May 4, 2010
Sign in to view read count 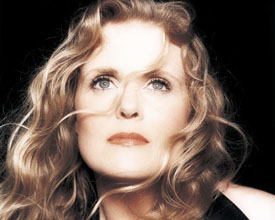 From humble beginnings as a Wisconsin-born choir girl (unexposed to jazz until college) Sutton has grown up into her role as jazz vocalist. Educated at Berklee College of Music in Boston, Tierney became a semi-finalist in the Thelonious Monk Jazz Vocal Competition in 1998. Her first solo CD, Introducing Tierney Sutton (1999), was released to rave reviews and nominated for a 1999 Indie Award for Best Jazz Vocal Album.

A versatile studio singer as well as premiere entertainer, Tierney's voice was recently featured on Lions Gate's hit film The Cooler, starring William H. Macy and Alec Baldwin. She can also be heard in Paramount's Twisted, starring Samuel L. Jackson, Andy Garcia and Ashley Judd. And in 2004, Tierney and her band scored the independent feature film Blue in Green, which was released by the Unica Project. Tierney's unique voice is also regularly featured in commercials representing such organizations as BMW, Coca Cola, Dodge and J.C. Penney.

Garnering rave reviews where ever she and her band perform, The New York Times has said of Sutton, “At the core of it all is an unassuming spiritual grace...a sense of jazz singing as an extension of spiritual meditation."

After the May 8 Tierney Sutton concert, An Evening with Chris Botti and Band on May 15 and one final concert by the Worcester Chorus in June (The Soul of American Music, United Congregational Church, Worcester, Saturday, June 5) marks the end of Music Worcesters sesquicentennial season. The 150th Anniversary Season of Music Worcester, originally known as the Worcester Music Festival, is recognized by the National Library of Congress as the oldest, continually running music festival in the nation.

Since 1858, Music Worcester, Inc. has had a rich tradition of offering the finest music programming and currently offers a full season of artistically diverse and world-renowned, international music and dance performances. Concerts are performed at Mechanics Hall, Tuckerman Hall and the Hanover Theatre. For more information on this seasons program, or for tickets, go to musicworcester.org or call 508.754.3231.