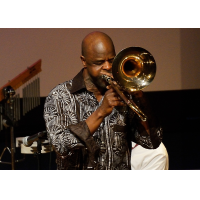 slideshow
Past and present journeys of all kinds – spiritual, professional, musical and cultural—intersected at the Newark Museum, where poet and playwright Amiri Baraka was honored and musician Craig Harris was featured during NJPAC’s TD James Moody Democracy of Jazz Festival. The celebrated Newark author was there in recognition of his seminal exploration of African-American music and culture, Blues People: Negro Music in White America, published 50 years ago under his birth name, (Everett) LeRoi Jones. Although the vast influence of Blues People as a scholarly work is incalculable, Harris distilled its scope into music, a 70-minute piece titled “Keep Your Razor Sharp.” The progressive jazz trombonist and composer performed the original work, commissioned by NJPAC, with the nine other members of his Nation of Imagination (trombone, guitar, keyboards, bass, drums and percussion, accompanied by vocalists and spoken word artists). Baraka mingled with well-wishers who occupied every available seat in the museum’s 276-capacity auditorium for A Celebration of Amiri Baraka’s “Blues People” at 50. The 79-year-old community leader and activist welcomed them to the free event with the story of his path to publication.

He credited poet and folklorist Sterling A. Brown, his professor at Howard University, for sharing some insightful advice. (The son of a former slave, Brown, fortuitously, was born on that campus. Writer Toni Morrison and actor Ossie Davis also were among his students.) Invited to Brown’s home, Baraka surveyed the collection of 78 rpm records there, mostly blues. “(Brown) said, ‘You want to know about the lives of black people? That’s your history, that music,’” Baraka recalled. “’The people there will tell you about their lives.’” A job at Record Changer magazine placed Baraka in the album stacks (“That was my graduate school, sitting in that basement every day.”) and in the company of jazz historians like Dan Morgenstern, later to become director of Rutgers-Newark’s Institute of Jazz Studies. Years of listening to the voices of blues giants—Ma Rainey, Muddy Waters— and all forms of African-American musical expression fed his urge to begin writing.

The resulting Blues People is a social and cultural assessment of the evolution of the sound of black America, from its genesis in “the sorrow songs” of slavery to Afro-Christian music, classic blues, minstrelsy and swing. That musical vocabulary informed Harris’ “Keep Your Razor Sharp,” which also included the interplay of text from Baraka’s Wise, Why’s, Y’s: The Griot’s Song Djeli Ya. More music and chat is on the way in the second annual TD James Moody Democracy of Jazz Festival, when Duke Ellington becomes the topic of conversation on Saturday, Nov. 9. Portrait of Duke will be hosted by playwright and critic Terry Teachout, author of the new biography Duke: A Life of Duke Ellington. Vince Giordano and the Nighthawks, featuring vocalist Hilary Gardner, are fully equipped—with 17 pieces—to play Ellington’s big band arrangements the way they were meant to be heard.