These live recordings are a first--no one has dared take on Peter Gabriel's material at this level before. 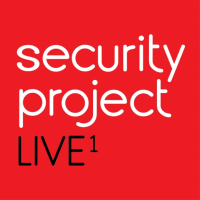 slideshow
The Security Project, featuring members of King Crimson, Shriekback and Peter Gabriel's original band bring the genre-less masterpieces of Peter Gabriel into the 21st Century on their new live album Live 1. Seattle-based Trey Gunn and Michael Cozzi join esteemed drummer Jerry Marotta and NY keyboardist David Jameson to harness the core of these songs. Added to the pedigree of these players is the voice of Brian Cummins, whose interpretations add haunting authenticity to the immaculate arrangements.

These live recordings are a first—no one has dared take on Peter Gabriel's material at this level before!

Jerry Marotta says: “Peter was always great at setting the table for us as musicians; he always got us started with great ideas… As we were creating Security we had no idea we were making something so unique… I’m proud that with Security Project we’re able to deliver the deepest of those songs, and do it with real conviction—playing them live.”

Marotta and Gunn first met when recording “The First Day” with David Sylvian and Robert Fripp in Woodstock, NY. Their friendship and musical partnership eventually led to The Security Project.

Says Trey, “This material is ridiculously special. Of course, Peter is a special artist. But the material on his first few records, especially the 3rd and 4th ones, are productions with no peer. The Security Project can really play these epic pieces. We bring the same level of detailed precision to arrangements that are present in the originals. And then some. We not only play some of the pieces authentically we also take many pieces and put our own twist on them. 'Here Comes The Flood' and our melding of 'Games Without Frontiers' with 'Of These, Hope' from 'The Last Temptation of Christ' soundtrack are just two examples.”

A native Texan who resides in Seattle, Gunn is known for the unusual 10-string touch guitar that he plays. From the blistering live recordings at the Royal Albert Hall in London with David Sylvian and Robert Fripp (“Damage”, Virgin Records) to ten years recording and touring with King Crimson – a group many contend as the most aggressively, adventurous rock band of all time – Gunn is associated with a constant stream of cutting edges projects. Gunn has toured and/or recorded with TOOL, John Paul Jones, Maynard J. Keenan's “Puscifer”, Vernon Reid, Azam Ali, David Hykes of the Harmonic Choir and Steven Wilson of Porcupine Tree. He currently runs his own media label (7d Media) while dividing his time between solo work; his projects TU, KTU, The Security Project, 3Below and Quodia; film/TV scoring and coaching musicians in the creative process.

Originally from Wales & London, Cozzi got his start in the mid 80's as the guitarist for the group Shriekback which had the pleasure of touring with “Simple Minds” “INXS” and “Peter Gabriel”. In the early 90's, Cozzi joined “Sky Cries Mary” with whom he co wrote 5 albums and toured extensively. During this time Cozzi opened up his recording studio “Moscozzi Studio” where he co-wrote and produced the last two SCM albums “Here and Now” and “Small Town”. He has written and produced music for bands, films, commercials, and video games, which led to him meeting and working with Trey Gunn. Two years ago Trey asked Cozzi if he knew of a guitarist for The Security Project, Cozzi put his hand up like a kid in the classroom and said “me me me”.

Brian has toured all over Europe with The Carpet Crawlers and with Mick Pointer's Marillion. When originally approached about The Security Project he thought it was a joke. “Play with Jerry Marotta and Trey Gunn? And performing some of my favorite music in the world? Come on!” Once it became clear to Brian this was no joke, he was on the first plane to Woodstock.”

Keyboardist/Eigenharpist David Jameson began his music career in the late 1970's – the heyday of powerful keyboard players. He spent several years touring with Time Machine and then left the music scene for a career at IBM after completing a PHD in Computer Science at Trinity College in Dublin, Ireland. At IBM, Jameson created and managed the Computer Music Research group and was elected to the prestigious IBM Academy of Technology. David left IBM to found Digiportal Software and Deskew Technologies that develops the acclaimed Scorecerer sheet music manager application for the iPad. He also designs MaxMSP applications and libraries for live performance and for the Eigenharp – an electronic hybrid instrument akin to a computerized bassoon that features heavily in The Security Project shows. In addition to working with The Security Project, David also performs with Beyond The Wall.

About The Security Project tour dates:

Here's what's being said about The Security Project:

“Sound as good — at times maybe better — than even Gabriel nowadays.”—Time Out, NYC

“Peter Gabriel wrote some of the finest most profound songs of his generation. The Security Project brings them to life with an authenticity that goes beyond mimicking the original recordings. They find the emotional core.”—Glenn Hughes

After the release of The Security Projects new live album and forthcoming West Coast tour, in the fall (October/November) the band will release a second CD of recordings (Live 2+, which is more live tracks combined with some studio tracks). They will then embark on a tour of the Mid-West and East Coast of the USA.