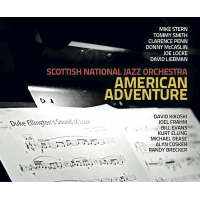 Following universal praise, the CD has now been submitted it for consideration at the 57th Recording Academy Awards. This is a first for Scottish jazz from an orchestra that is barely twenty years old and it is indicative of a daring vision for orchestral jazz.

The Scottish National Jazz Orchestra was established in 1995 and American Adventure marks a special moment in its relatively short history as it prepares for its 20th anniversary celebrations next year.

Tommy Smith is a leading jazz saxophonist, composer and arranger. He is head of Jazz at the Royal Conservatoire of Scotland in Glasgow and founder/director of the Scottish National Jazz Orchestra (SNJO).

“This band can do it all, from straight ahead to free jazz.” —DAVID LIEBMAN

“They hold themselves to the highest standards of musicianship and perform new music and classic charts with ingenuity and verve. I am a fan!" —KURT ELLING

“The SNJO is one of the most inventive and contemporary orchestras in the world. I am truly honored to be a part of it. This record burns!” —BILL EVANS

“On the day I was in the studio with the SNJO, the orchestra almost melted the sound tiles.” —JOE LOCKE

“They have it all: precision, great soloists, deep swing… and the one and only Tommy Smith at the helm!” —RANDY BRECKER

“The SNJO deserved all the praise Kurt Elling so graciously lavished on them.” —THE TELEGRAPH

“The growth of the SNJO over the past two decades has been the most significant development ever in Scottish jazz.” —THE SCOTSMAN

“American Adventure is one of those rare gems: a truly inspirational collection of music from people at the top of their game.” —IRISH EXAMINER