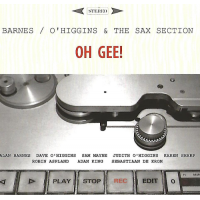 slideshow
From time to time, I post on albums that showcase saxophone sections. What can I say, I'm a sucker for reeds. The last time I posted on such an album was in June, when I wrote about Jay Cameron's International Sax Band from 1955 and provided a long list of my favorite sax section albums (go here).

The arrangements are by Alan Barnes and David O'Higgins (above), and the reed players are superb, both as a unit and as soloists. The writing is airy, well paced and takes full advantage of the tough, breezy reed players. Behind the reeds, the rhythm section swings hard, providing the right amount of drive.

As Barnes writes in his notes, “We recorded in the old-fashioned way: a run through, then straight to record. What you hear is what happened." Meaning, tracks weren't the result of the best snips from multiple takes. It was recorded in one shot, which means this band rehearsed its tail off before recording.

I'm surprised this album didn't get more play in the States when it was released. It's terrific.