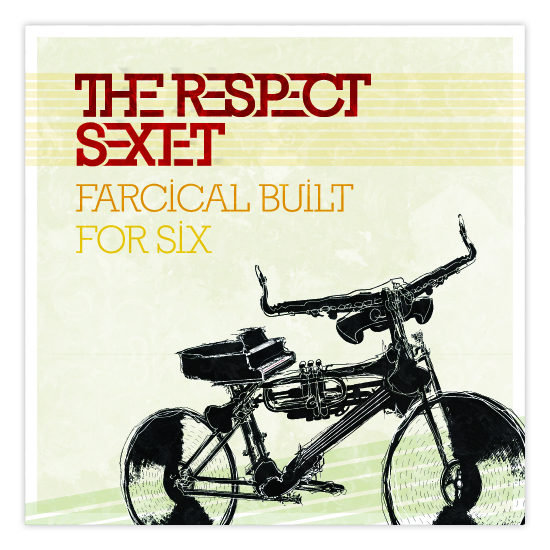 THE RESPECT SEXTET RETURNS TO LE POISSON ROUGE ON TUES, AUGUST 17, 2010 AT 10:00PM TO CELEBRATE THE RELEASE OF THEIR NEWEST, DIGITAL-ONLY RECORDING, “FARCICAL BUILT FOR SIX"

NEW YORK, August 4, 2010—The Respect Sextet will perform at Le Poisson Rouge on Tuesday, August 17, 2010 to celebrate the release of their newest, digital-only recording, Farcical Built For Six. Cantaloupe recording artists Toby Twining and Eric Brenner will open the show, performing a set of solos, duets, as well as a couple collaborations with Respect.

Farcical Built For Six is the special digital-only, outrageous and eclectic follow-up to the acclaimed Sun Ra and Stockhausen tribute album, Sirius Respect. The Respect Sextet's first original studio recording since their 2003 debut, Farcical welds together deep, odd grooves, wry and playful jazz ditties, thoughtful solos, and spacious improvisations into an utterly unique ride that's both fun and functional! No doubt about it, this is vintage Respect—sure to leave a smile on your face and a furrow on your brow...at the same time!

Farcical Built For Six will be available starting Tuesday, August 17 on Respect's Bandcamp page (http://respectsextet.bandcamp.com/), as well as on iTunes, Amazon, Rhapsody, and other digital music retailers.

About The Respect Sextet

Formed in 2001, The Respect Sextet is a powerhouse ensemble dedicated to performing a wide variety of improvisational musics. Relying on their explosive energy, rare telepathy, outstanding musicianship, and a deep friendship, Respect pieces together free improvisations, original compositions, free jazz classics, television commercial jingles, text pieces, jazz standards, game pieces and more into “a whirling collage," shouts Exclaim! Magazine, “that ransacks and reshapes the entire jazz tradition, from New Orleans march to Misha Mengelberg, Sun Ra to Charlie Parker." Named “one of the best and most ambitious new ensembles in jazz" by Signal to Noise, The Respect Sextet continues&#151after nearly a decade as a collective—to fearlessly push the envelope.

Respect's 2009 release, Sirius Respect: The Respect Sextet play the music of Sun Ra & Stockhausen, (Mode/Avant), was called “one of the most compelling recordings of the year" by the Wall Street Journal and filed under “Love It" in Newsweek Magazine ("an out-of-this-world pairing"). Sirius Respect brings together the music of Sun Ra and Karlheinz Stockhausen and views them through Respect-colored glasses. Pieces ranging from Stockhausen's “Tierkreis" (inspired by the Zodiac) to Sun Ra's “Saturn" are juxtaposed, layered, deconstructed and re-assembled. “It's neither jazz nor classical," says John Schaefer of WNYC's Soundcheck, “but something cosmically both."

Through its eclecticism, humor, devotion to improvisation, predilection towards swing, and its use of toys and “little instruments," The Respect Sextet has drawn comparisons both to New Dutch Swing and the AACM. Many dialectics are at work (and play) in Respect's world, in which the serious, heady, and intellectual mingle with the light, comic, and absurd, where compositions alternate and mesh with improvisations, and where tight ensemble work coexists with loose, empathic interplay.

About Toby Twining with Eric Brenner