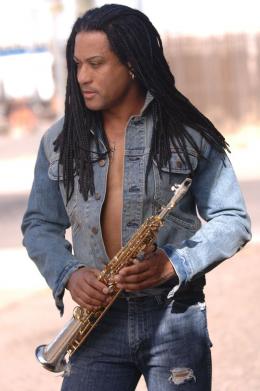 slideshow
Minneapolis - One of the hottest and most unique celebrity driven Podcast to hear some of Billboard's chart topping award winning music producers, composers, arrangers, vocalists and engineers discuss their production techniques and preferences, influences, song structure, music instruments, genre, style and their craft, state of the art recording equipment, background and upcoming projects is:

The Producer's Corner with Spud Too Tight on ITunes Podcast

Edgy R&B/Smooth Jazz Music Producer/Composer Spud Too Tight is also prolific and gifted on keyboards, guitar/bass, drum programming, engineering and is an avid Logic Pro 8 and MacBook Pro user. He has been in the game for nearly 20 years composing and producing that 'It Factor" music for indie artists, released Pop/R&B music on iTunes, Smooth Jazz Music PSA's for some of Hollywood's Icons, tracks for radio and television commercials, and Smooth Jazz FM. His latest smooth jazz composition “Spud's New Zone" is one of the featured songs played on his website and an appetizer for his winter/spring CD release. Spud Too Tight is one of the “Go To" music producers for that edgy defined sound, and unequivocally shares his knowledge about Logic Pro 8 and other producing techniques. He has a four year Publishing/Administration deal with one of the industry's leading companies in North America, Missing Link Music.

This week world renowned Jazz Saxophonist/Composer Marion Meadows was a unique special guest on The Producer's Corner with Spud Too Tight. His persona gleamed through the interview as they discussed song structure, the art of composition, the value of giving back to the arts, one of Marion Meadows legend songs Sweet Grapes was a “hats off" by Spud Too Tight and his new extraordinary CD titled Secrets closed the show with one of his finest creations “Let The Top Down"

Saxophonist Marion Meadows is hiding something. Like a deft sleight-of-hand artist, there's always something up his sleeve - something he's not showing you outright - that ultimately reveals itself when the music starts. Somewhere in those mysterious spaces between the notes - at the convergence of melody, harmony and rhythm - the simple treasures and universal truths are laid bare for those whose ears and minds and hearts are open to discover them.

Meadows uncovers some of these hidden mysteries on Secrets (HUCD 3150), his new recording on Heads Up International, a division of Concord Music Group, which was a worldwide release on April 28th, 2009.

For Meadows, the secrets within the music reveal themselves on a subconscious level - a place where higher reasoning takes a back seat to instinct and intuition. And for as much as Meadows may be the keeper of the secrets, they are often just as much a revelation to him as they are to the listener. “Secrets are things that are kept hidden beneath the surface of our own intellect, our own decision-making," he says. “They're these treasures that are often right in front of our eyes and yet we don't even see them or know they're there."

Discovering these unseen treasures requires a more organic approach to the music, says Meadows. “I wanted to incorporate a more live sensibility into the recording process in the making of this record," he explains. “I wanted to use musicians who have also been part of my live performances. Contemporary jazz artists can get a little caught up in the more stylish side of the recording process, with computers and drum machines and other cutting-edge technology. For as good as all that stuff can sound, there's an organic element that gets lost. If you move too far in that direction, I think people start to take musicians in this genre - and the genre in general - less seriously as a result."

Because of this commitment to authenticity, Secrets is the real deal from the get-go. The set opens with the title track, a mid-tempo piece that showcases not only Meadows' expressive sax work but also the shimmering lines of keyboardist and longtime collaborative partner and producer Michael Broening.

Trumpeter Jesse McGuire steps in on the followup track, “Let the Top Down," and adds a layer of counterpoint to Meadows' saxophone. The track follows a subtle but consistent backbeat engineered by guitarist Freddie Fox and bassist Mel Brown.

For all of the capable hands on deck, Secrets is ultimately about the army of ears on the other side of the musical equation, says Meadows. “When we put these records out, we tend to forget about the fans' initial response to them," he says. “We live with these projects from their conception and birth all the way up to the final details of post-production and pressing. In a lot of cases, once it's done and out the door, we need some distance from it for a few weeks. But at that same time, it's a fresh new experience for the fans who buy it. They're saying, 'What's this thing going to sound like?' For them, it's still a secret. It's something that has yet to be discovered and explored."

This story appears courtesy of entertainmentPR.
Copyright © 2021. All rights reserved.