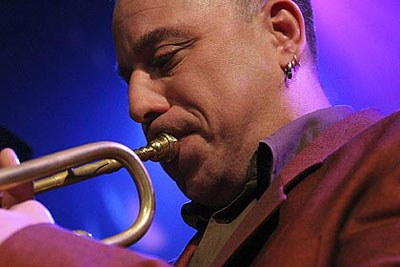 Philadelphia, PA—Painted Bride Art Center presents Black Cat Brew, an evening honoring the Bride's on-going music series and the artists that have played at the Bride over the past 39 years. The Bride's Jazz on Vine series, the longest running jazz series in Philadelphia, was just awarded, for the second time, the ASCAP National Award for Adventurous Programming.

Taking place during National Jazz Month on Friday, April 13 (Jazz Appreciation Day in Philadelphia) Black Cat Brew will fill the Bride's walls with live music and art, a Silent Auction & raffle, jazz karaoke hosted by Sing Your Life, as well as dinner by 12th St. Catering and drinks by Flying Fish Brewery, Amanti Vino and Art in the Age of Mechanical Reproduction. The main attraction for this special fundraising event will be Steven Bernstein's MTO Plays SLY live in concert in the Bride's theater.

All funds raised from this event will be used to benefit Painted Bride Art Center and its programmatic and educational activities.

This evening's festivities will continue with Steven Bernstein's Millennial Territory Orchestra (MTO) for the regional debut performance of its third studio album, MTO Plays SLY. Grammy nominated trumpet-composer Steven Bernstein (Sex Mob) leads his 12-piece ensemble featuring a top-flight roster of talent through the monumental songbook of Sly & The Family Stone to deliver unforgettable fun for all as they perform from the freewheeling and jubilant 13- track tribute. The concert coincides with Philadelphia Jazz Appreciation Day. MTO Plays SLY is “a celebration, a loving jubilance, pure and simple...MTO romps through some of Stone's best-loved songs, sticking closely to the spirit of the originals," says AllAbout Jazz.com. By filtering the music of Sly and The Family Stone through its own “downtown NYC" aesthetic, MTO illuminates the melodic and harmonic sophistication of this immortal body of work, while upholding the Day-Glo soul and psychedelic funk that's the backbone for classics like M'Lady, Everyday People, and Family Affair. Regarding Bernstein's creative approach to the project, Revivalist.com submits, “He could have taken the typical route with a standard rendition of these classic records...instead he chose to re-imagine the music under his own guise, making something completely new. But for its innovative approach, it has captured their legacy in its entirety."

Concert tickets: $25 in advance and $30 on the day of show. For more information or to purchase advance tickets or for more information, call 215.925.9914 or visit paintedbride.org. The Bride's box office hours are Tuesday through Saturday; noon to 6:00 p.m. Patrons enrolled in ticket discount program receive 20% off of single tickets all season long and 40% off tickets during semi-annual sales. Students and seniors with ID receive a 25% discount. The Bride is located at 230 Vine St. on the northern edge of Old City, Philadelphia.

About the Painted Bride Art Center

Continuing its role as a catalyst for independent artists from the region and around the globe — Painted Bride Art Center enters its 42nd year offering audiences alternative travel passage to experience a world of culture fueled by various artistic forms and genres including music, dance, theater and the visual arts.

Jazz Appreciation Month is a project of the Smithsonian Institution's National Museum of American History and this year marks the 11th anniversary of the national celebration. The goal of Jazz Appreciation Month is to further stimulate the current jazz scene and encourage people of all ages to participate in jazz by studying the genre, attending concerts, listening to jazz on radio and recordings, reading books on the topic and supporting institutional jazz programs. The Philadelphia Jazz Coalition—a group of musicians, presenters, club owners, media and music schools in the jazz community—has been established to spearhead the City's celebration efforts by collaborating to promote and support Philadelphia's rich jazz tradition and assets.