The other side of Marty Morell 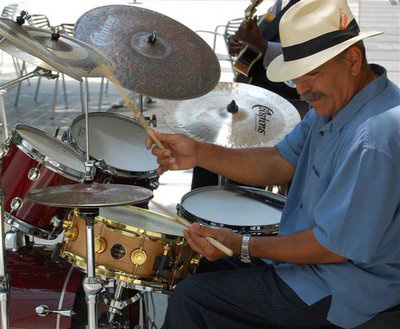 slideshow
Tampa-based Marty Morell is best known for his seven-year tenure as pianist Bill Evans' longest-serving drummer, from 1968 to 1975. He was in the house last season as the drummer in saxophonist Jeff Rupert's ensemble featuring singer Veronica Swift, but the Charlotte County Jazz Society's 2018-19 season finale on Monday, April 8 was the first local opportunity to hear him on vibes- and with a decidedly Latin flair.

Morell came to Port Charlotte with the M&M Latin Jazz Ensemble, a septet that he co-leads with his wife, Michiko, a talented Japanese-born percussionist who also sings. On this night, she didn't sing nearly enough.

The percussion-rich ensemble also featured Rupert on tenor sax and flute, Richard Drexler on piano, Cuban-born Mauricio Rodriguez on bass, Omar Perdomo on congas and Dimas Sanchez on drums, the latter pair originally from Puerto Rico. Michiko played bongos and a gourd-like güiro, a Latin percussion staple that has exterior notches that when rubbed by a stick creates a ratchet sound.

The band for the most part presented the cooler side of Latin jazz, with Morell's resonating and shimmering vibes riding over a poly-rhythmic cushion on tunes mostly from the Great American Songbook- or the mainstream jazz canon. They included “Night and Day," John Lewis's “Django" (from the Modern Jazz Quartet repertoire), “Midnight Sun," Mal Waldron's ballad “Soul Eyes" and Victor Young's “Delilah" from the movie score to “Samson and Delilah."

Vocals were featured only “Son al Son," which would have been far more effective had it been performed in the first set rather than after the intermission. The enthusiastic crowd response it drew also showed that there should have been more vocal numbers.

The ensemble only performed five tunes in each of the lengthy sets. As superb as the playing was, the extended solos given to each player in every arrangement slowed the evening considerably.

The concert drew a crowd of more than 300 to the Cultural Center of Charlotte County's William H. Wakeman III Theater.